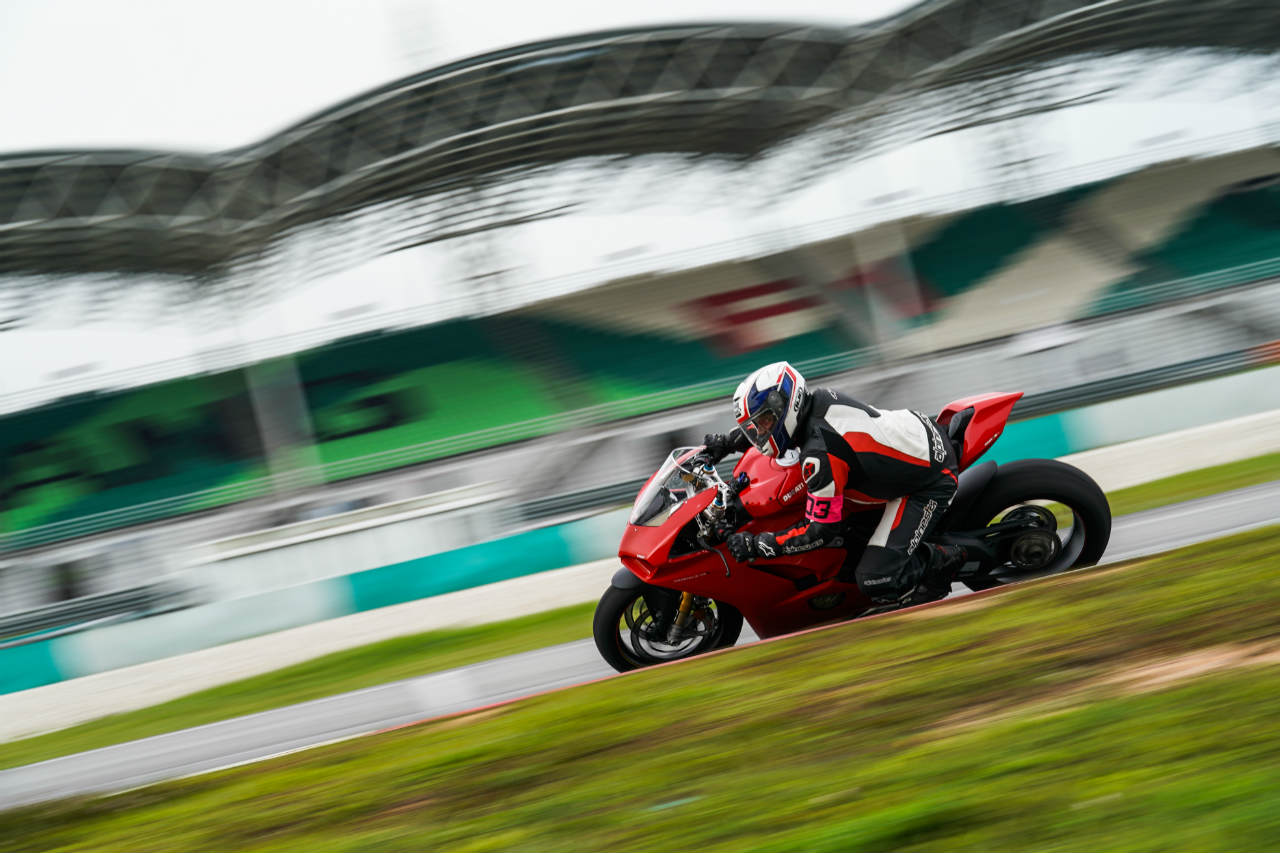 Let’s face it, motorcycles aren’t going through any ground breaking strides in technology. The golden era of game changing developments ended a few decades ago when this millennial generation were still practicing an innate form of intricate diaper art. Motorcycle manufacturers have already explored most of the ingenious engineering innovations that saw motorcycling stride forward in leaps and bounds. We’re now at the era of tweaking and tuning existent technology to extract the most out of a motorcycle with the least amount of human effort. If you were surrounded by polite motorcycling company and decided to marvel at the effectiveness of ABS systems, or the precision and force that disc-brakes offer, the absurdity in your reasoning would probably make for a very valid next point of arbitration. These are technologies that are taken for granted, but how far they’ve come from the rudimentary systems they once were is astounding. In simpler terms, the processing power of one onboard computer is now probably equivalent to the collective thought process of an entire Indian state. I kid, of course. Maybe…

In this great pursuit of motorcycling perfection, the Italians seem to have lost their sense of humour about it somewhere along the way. That raw passion has given way to a sacred sort of science when it comes to producing and racing motorcycles. Motorcycling is to Italians as haggling is to Indians; it’s an almost intrinsic process at this point. And motorcycle racing is a sport deeply entrenched in Italian history, with Ducati being the current face of it; it has been for a while now. While Ducati has absolutely mastered the art of twin cylinder sorcery, two heaving lumps of metal could only take it so far. So Ducati decided to split those two lumps into four and throw in a theoretical tonne of more electronics to make this one of the quickest production motorcycles on the planet. Aside from my ridiculous oversimplification of all this, has it really worked? 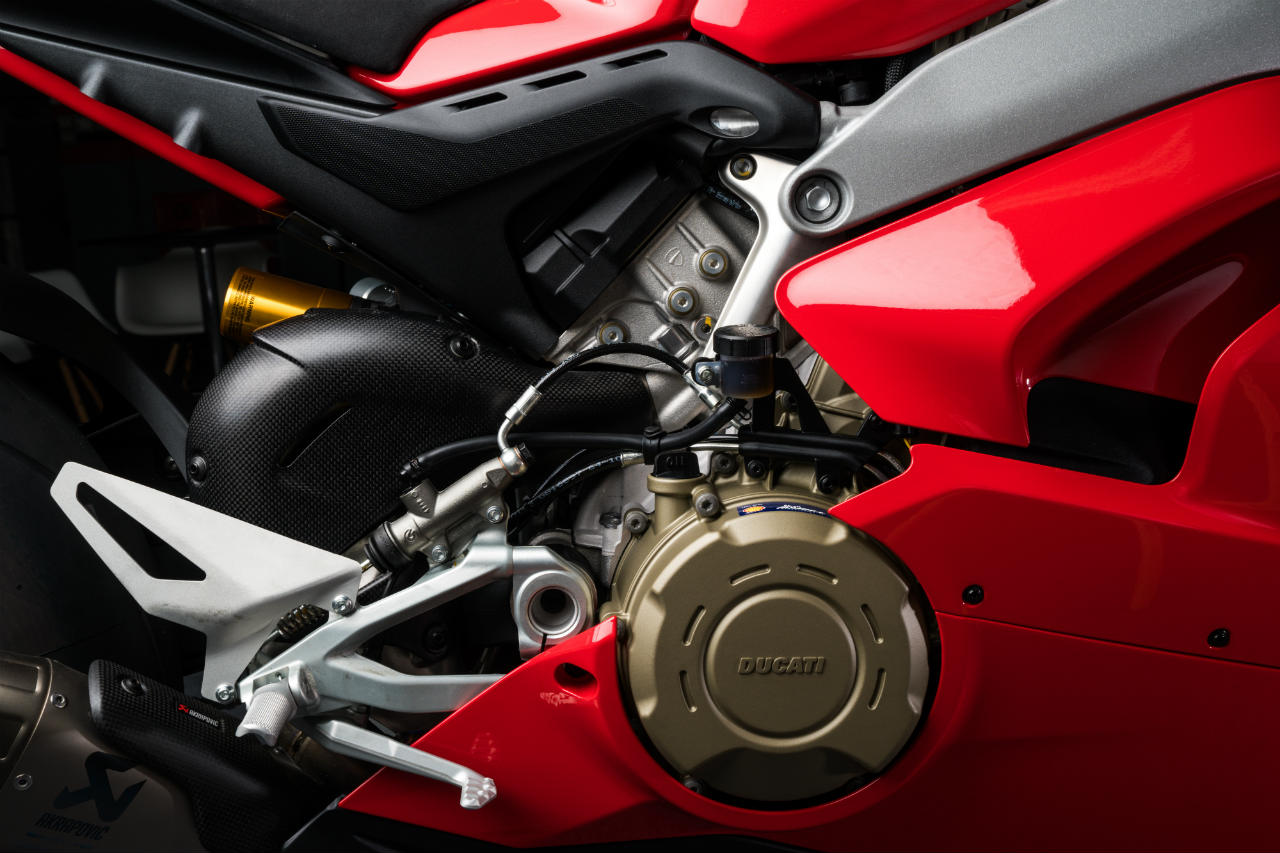 Before we get into how this motorcycle rides, let’s take a small peek into what went into it. We’ll just start with the most stark development from Ducati, the V4 Desmosedici Stradale engine. Now Ducati’s known for producing absolutely manic 90-degree V-Twin engines, famed for their low-end and mid-range grunt. What the addition of two more cylinders has done is simply added another dimension to that. You still have access to the low and mid range power (what you think the extra 104cc is for?), while now even the top end gives you an absolutely mental amount of it. There’s just power everywhere. Ducati has been employing this four-cylinder layout on its MotoGP bike ever since 2003. Even though it’s taken all of fifteen years to see daylight on a production motorcycle, it’s definitely been worth the wait. 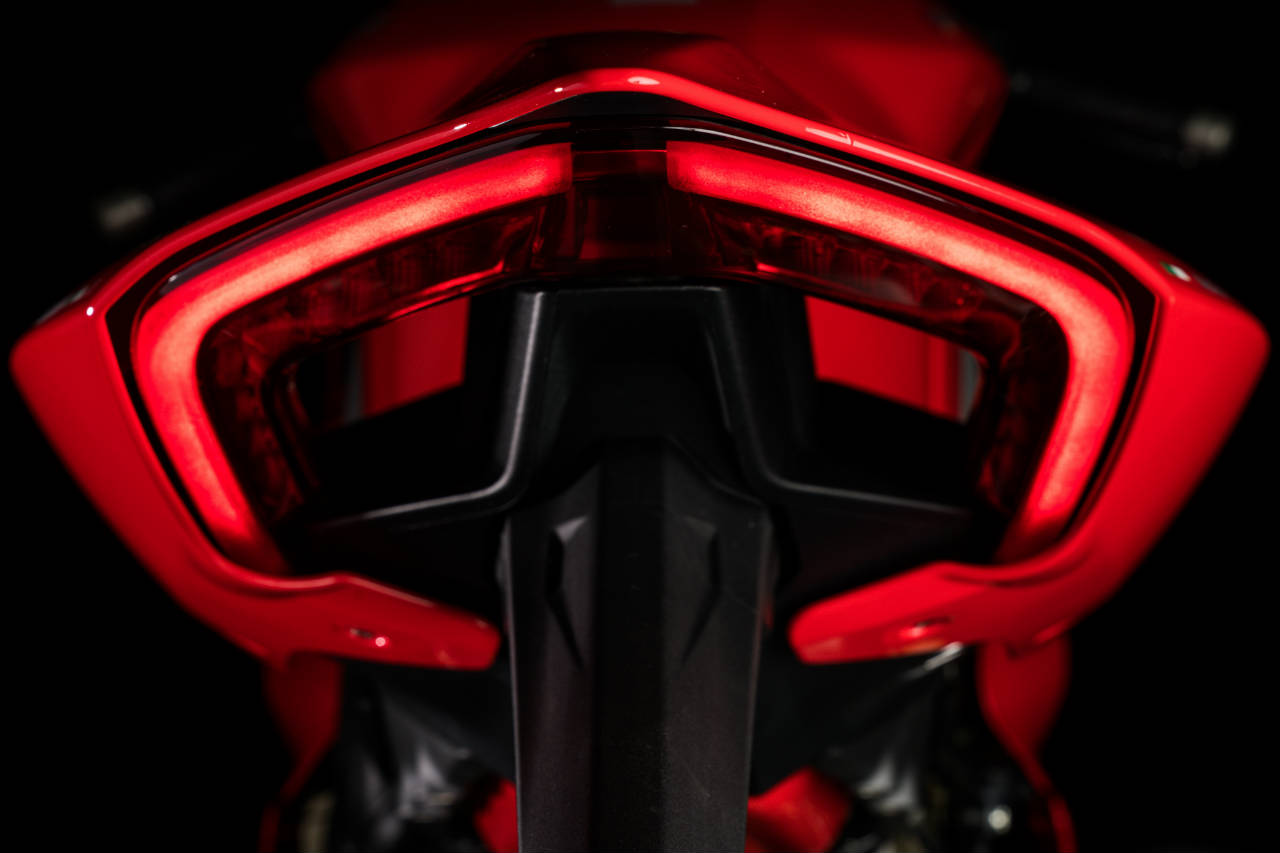 The ‘twin pulse’ firing order has been employed to keep the big-twin feel around. And this feel will give you the impression you need to shift early. But hold on the shift until 13,000 rpm and you will experience the proper four-cylinder frenzy of this machine. At low revs you won’t be overly impressed by its aural output; it’s gruff and mechanical. But once the revs climb, you will be utterly seduced by the howl that emanates from the underbody exhaust. You won’t have much time for that, though. You’ll simply be holding on for dear life as the V4 S rockets out of turns with a single minded purpose; get to the next apex, pronto. So to keep inertial forces in check, it gets a reverse rotating crankshaft, which eliminates the need for a counter balancer altogether. And of course if you invest in the full titanium exhaust system from Akrapovic, you immediately get 10 more bhp, and new mapping for the traction and wheelie control. Like 211bhp wasn’t already enough. 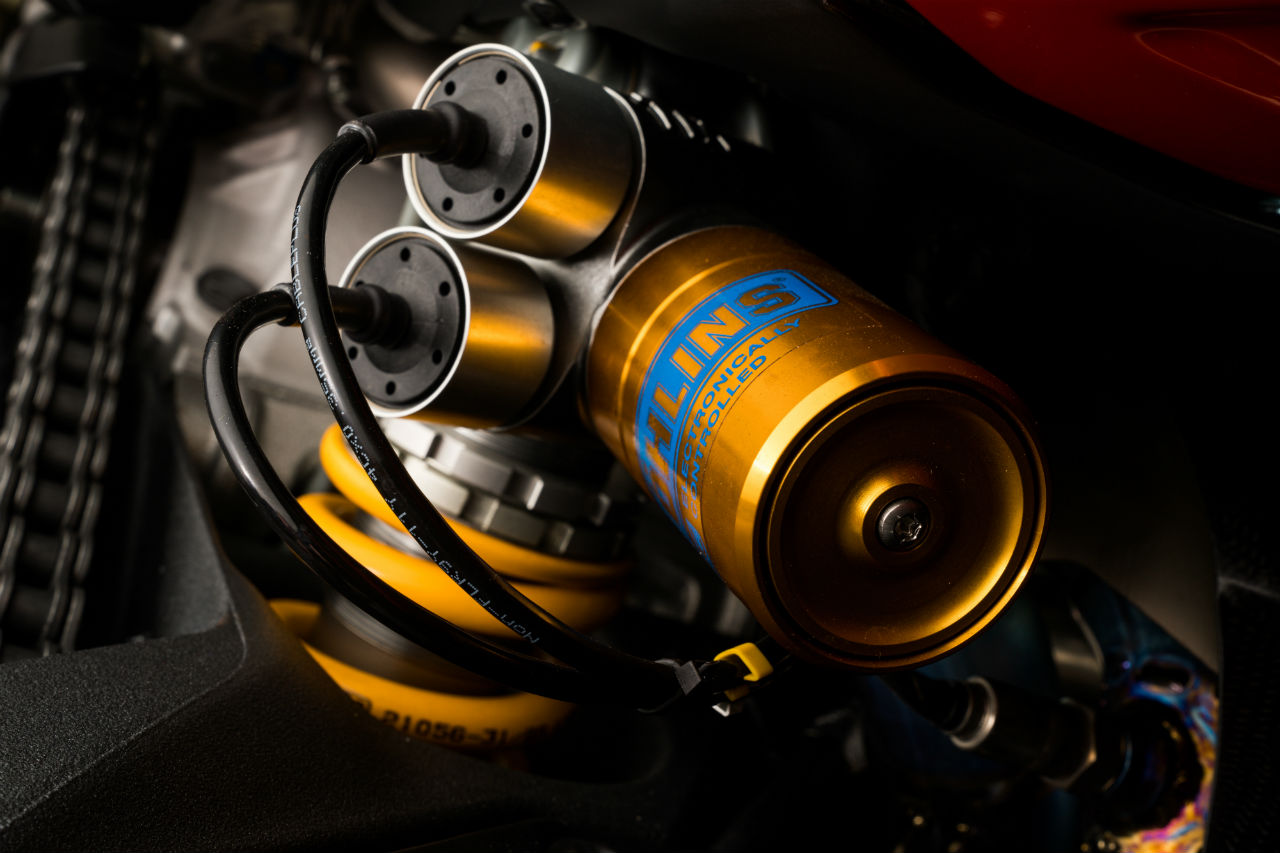 But moving on, the new frame, engine and overall setup has been carefully crafted to make this a very light, precise, and responsive machine. To minimise the inevitable weight gain from the extra cylinders, Ducati developed an all new frame called the ‘Front Frame’. It’s more compact and lighter than a perimeter frame and uses the engine as a stressed chassis element, which keeps the kerb weight of the S and Speciale versions down to 195kg. When compared to the monocoque design, the Front Frame allows torsional rigidity and lateral rigidity to be kept separate, to better absorb any road surface roughness when cornering. The compact dimensions of the new engine have also allowed for a longer swing arm. While generally a longer wheelbase would translate to more stable but less nimble handling, Ducati has gotten its calculations quite right with the rake and trail for the front end. This makes the V4 S hit the responsiveness sweet spot and eliminate the effects of having a longer swing arm. And the new suspension is just glorious. The fully electronically adjustable Ohlins suspension that the V4 S gets is simply sublime. It borrows a page from its MotoGP books and even has event specific setups, which means the suspension will adjust itself based on each specific corner. But the electronic sorcery doesn’t end here. 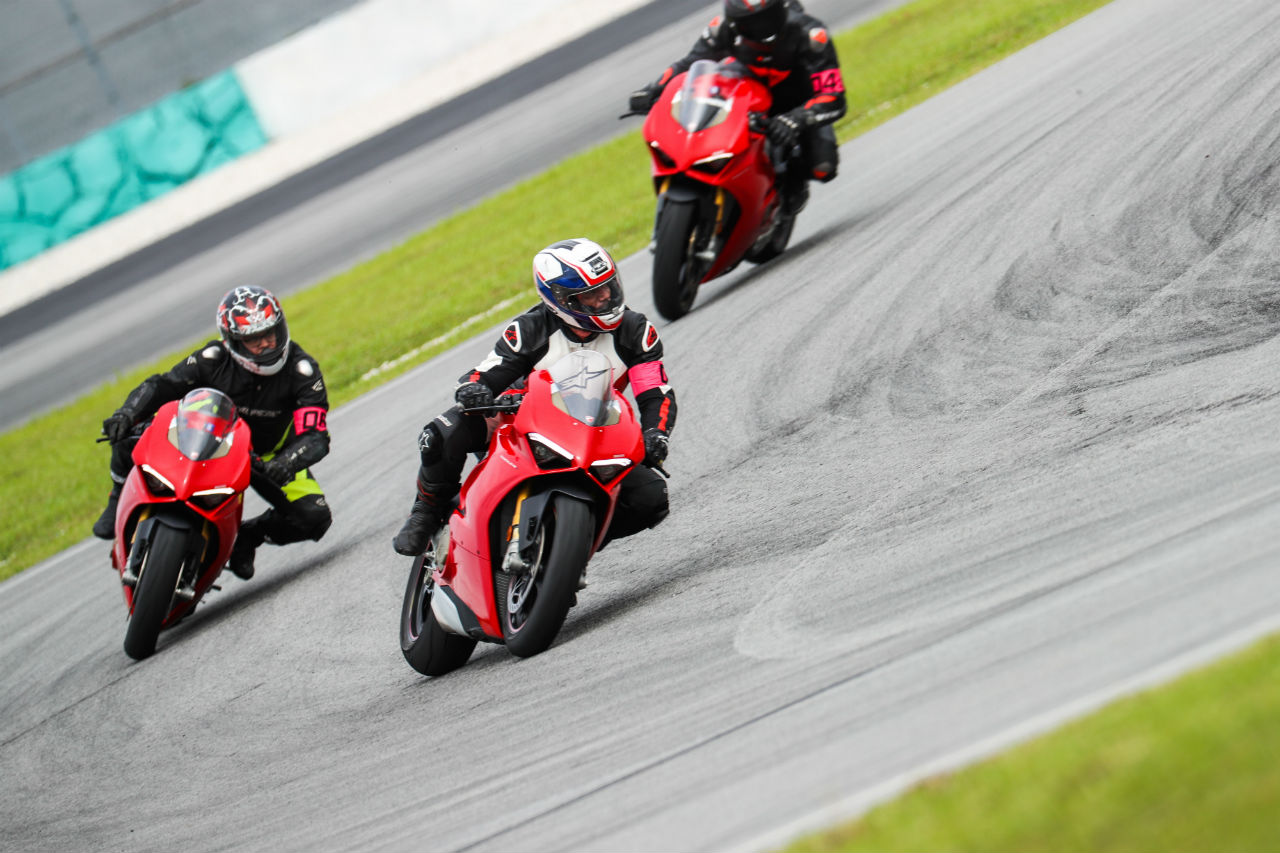 All the electronics on the V4 S are IMU based, which is now the norm amongst litre class bikes. There’s the regulars, like cornering ABS, cornering traction control and wheelie control. But the V4 S has a bunch of party tricks that will keep you at the edge of your seat at all times. The cornering ABS by Bosch isn’t just your average cornering ABS, no. It’s got a slide by brake feature that will let you lock up the rear to the right degree and slide it into corners. While this may sound brilliant, let me assure you, braking from about 270kph to 80kph will have you worrying about a lot of other, more important things than looking cool; like staying alive for instance. There’s also lean regulated engine braking (EBC) that ensures you’ll have to pull off some real circus antics to get to the proper limit of this bike. Even the traction control has a lean-angle based ‘Slide on demand’ feature that will let you slide out of corners. That again, sounds very cool, but we’ll leave these to the pros. One day of riding at Sepang simply wasn’t enough to give me the confidence to experiment with all of this. 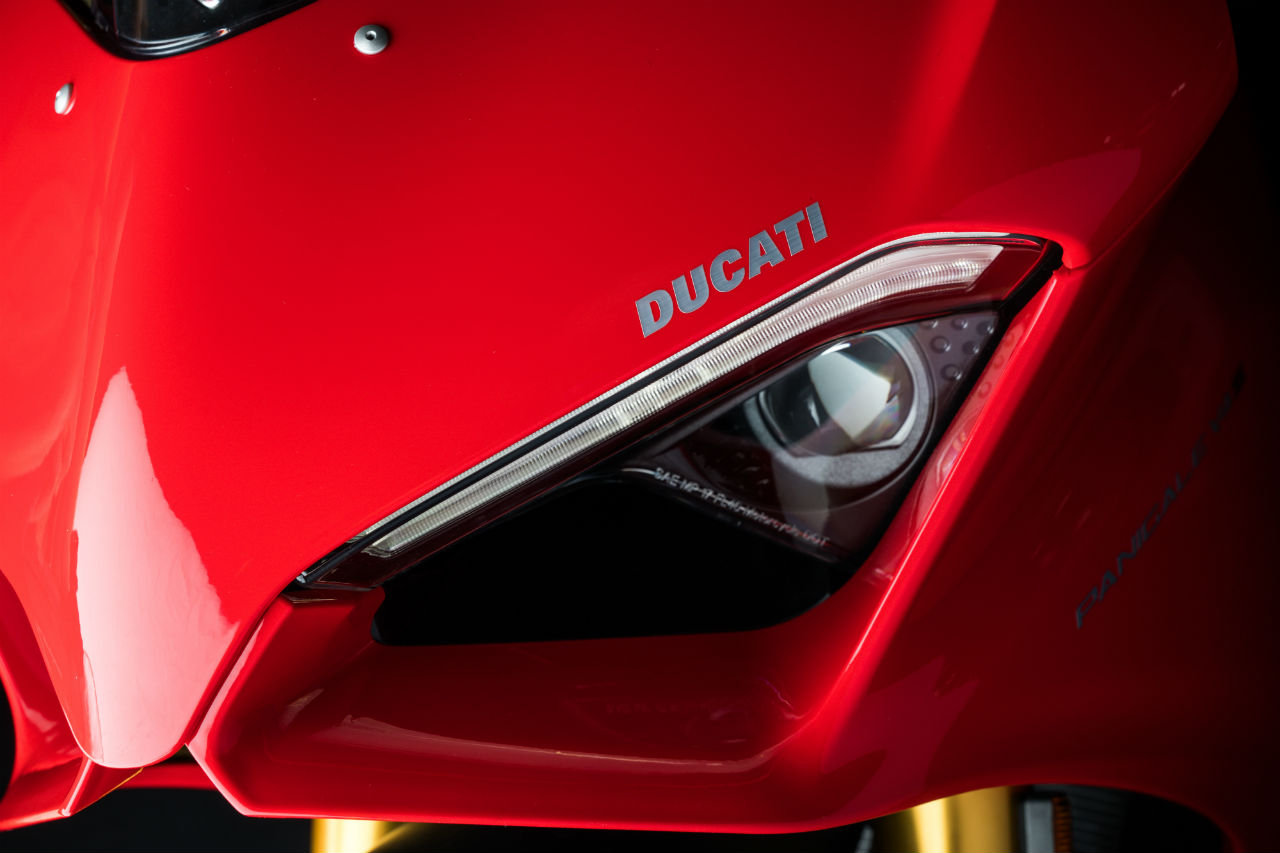 Then there’s the wheelie control (DWC). If there’s anything that will make an amateur look like a racer, it has to be this feature. It works in conjunction with the counter rotating crank and electronic steering damper to allow the front wheel to simply float a few inches off the ground every time the bulk of the power kicks in. And of course you’ve got the two way quick shifter (DQS) that’s got an auto blipper for the downshifts, which eliminates the need for the clutch, unless you’re just getting moving. And even then there’s launch control (DPL), which will allow you to harness the full 211bhp without turning into a special-edition Ducati cartwheel. 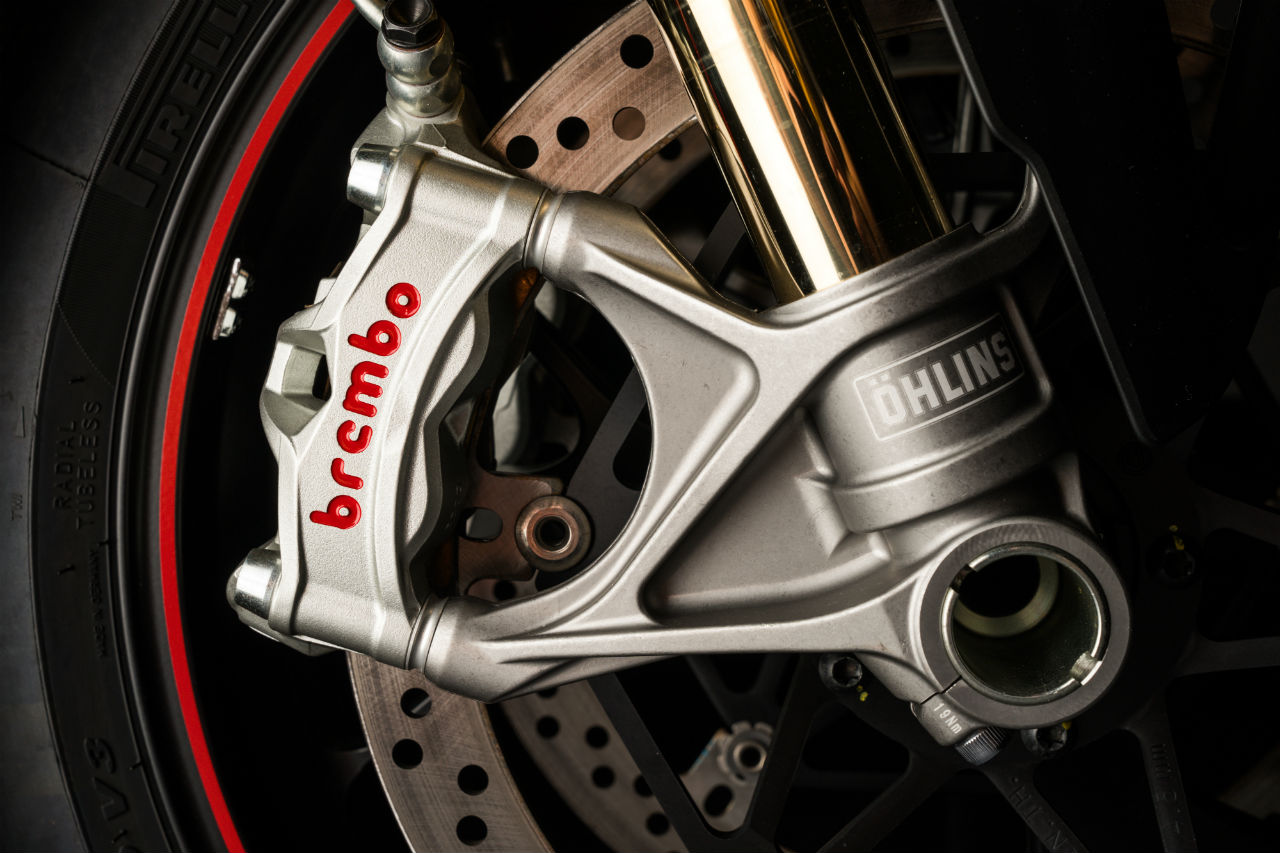 All in all, the V4 S is an astonishingly fast machine. Once you hit the straights and pin the throttle, you’d be surprised at the rate at which speed builds. You’ll need to be quick enough on the shifts to avoid running out of gears each time. Of course there is the small issue of false neutrals on the upshifts, but Ducati has managed to eliminate the scarier version of that happening on the downshifts. Even then, the V4 range debuts Brembo’s new Stylema monobloc calipers; a worthy successor to the already highly effective M50. The feel and confidence these brakes put forth encourage you to brake closer and deeper into the corner, no doubt. I often found myself braking too early and having to coast to the corner. Better that than seeing 270kph on the speedo and braking after the 150 metre marker; that takes a lot of practice and obviously, wrecking-ball sized cajones. 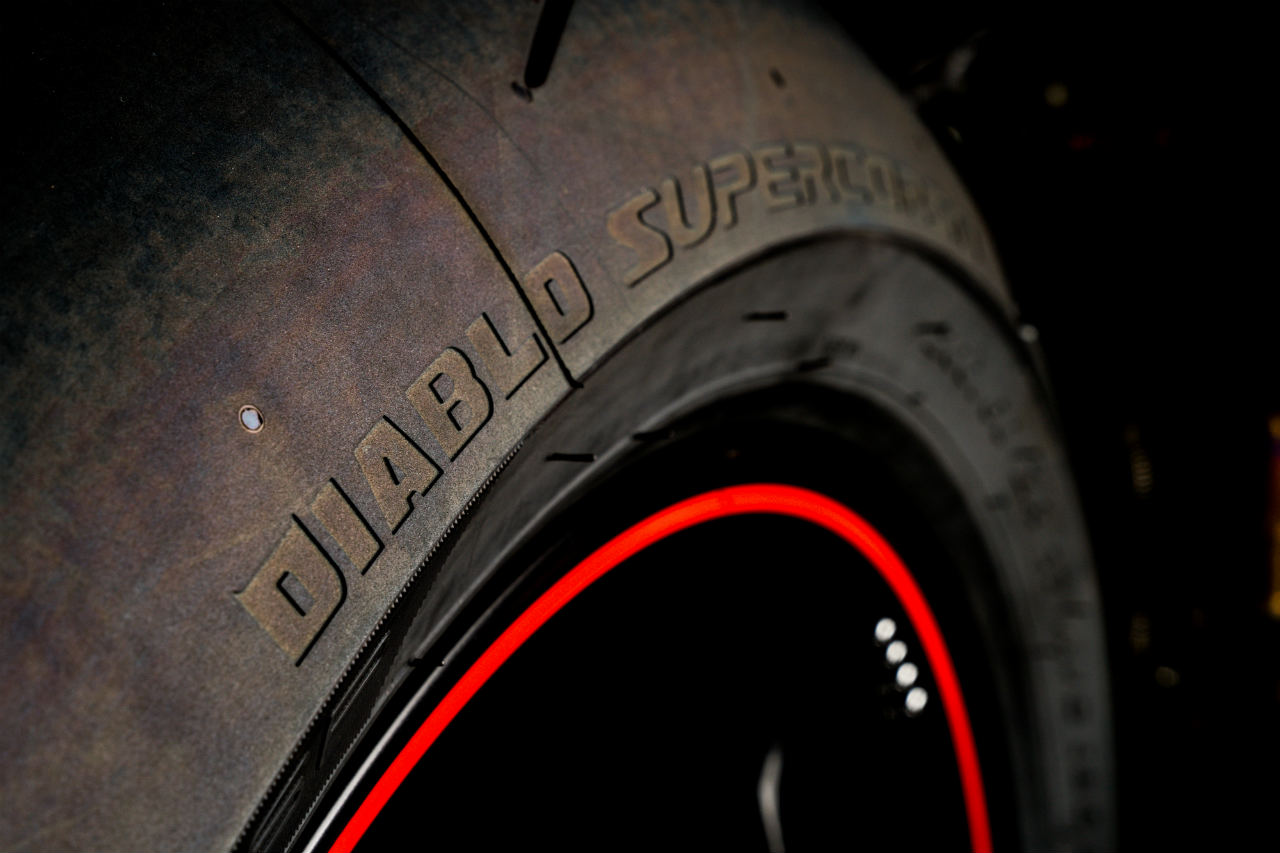 Of course the new tyres from Pirelli, the Diablo Supercorsa SP, take the game of adhesion to a whole new level. These are basically race-derived tyres that have grooves on them just so they’re street-legal, too. The levels of grip are absolutely mental. The carcass and compound have been specially developed in conjunction with Ducati, so you know they’re at their optimum performance. While coming into turn two at full lean, the bike simply rolled over the rough patches on the track like they just weren’t there. No tyre skip, no unsettling of the front end, nothing. The most beautiful part of this bike has to be how forgiving it is. Don’t get me wrong, the V4 S isn’t some tame little middleweight that is going to do the riding for you. The thing is that it has such a high margin for error that you’ll need to pull off some extraordinarily fast or stupid manoeuvres to get this bike off its feet. 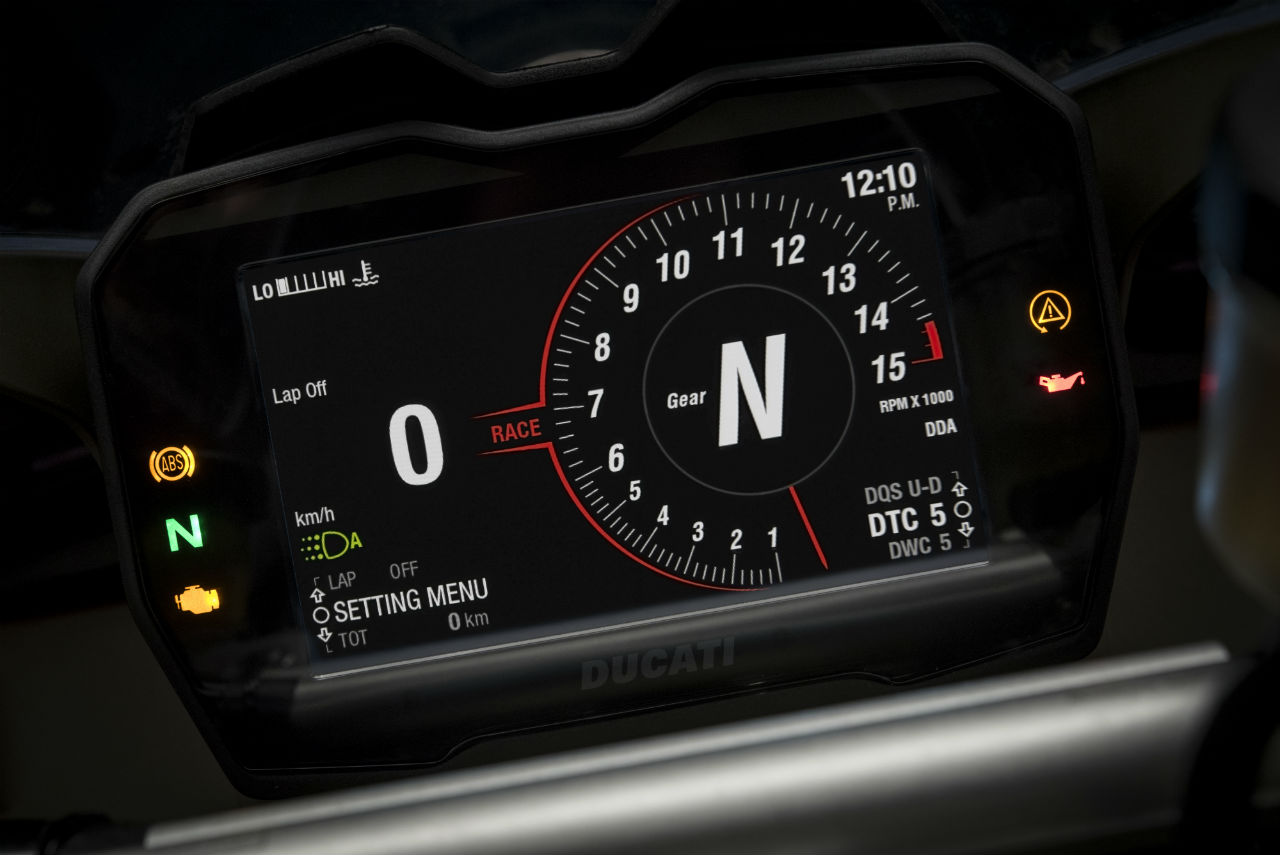 In terms of size, it’s surprising how compact the V4 S is. While this is great from a racing standpoint, us non racing, portly fellows are going to find it a bit cramped. It’s not as accommodating as say a Yamaha R1, or a BMW S1000RR, or even the older Panigale. The riding position here is a properly aggressive one. If you want to truly extract and enjoy the true potential of this machine, you’d better be in prime condition. The racing fuel tank layout means you’ve got a bit of the tank under the seat too. And the foot pegs have been raised 10mm for more cornering clearance. Let’s also give a special mention to the all new 5″ TFT screen that has a high resolution and high brightness colour display. It’s been completely redesigned in terms of layout and graphics, which also includes a new virtual circular rev-counter located on the right side. 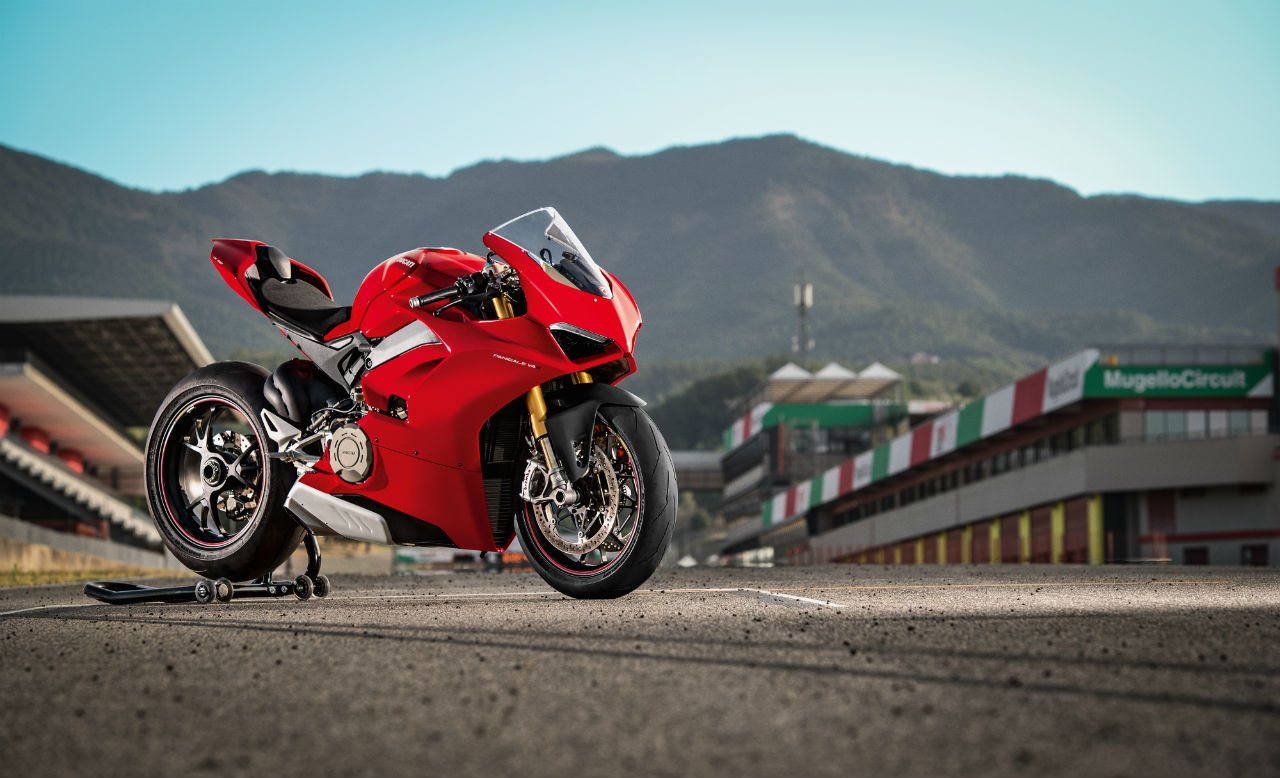 To say this new formula has worked would be a gross understatement. Ducati have absolutely annihilated all expectations of this motorcycle. The lads back in Borgo Panigale have managed to craft a motorcycle that goes beyond what a great litre bike is. The Panigale V4 S is a symphony of precision, focus and dedication. But just saying these things doesn’t begin to describe how everything has come together on this machine. It’s been only a few years now that litre bikes have strayed into 200bhp territory with a sub 200 kg overall mass. What’s marvellous is how this new 211bhp lunacy from the V4S is fettered into being one of the most manageable, forgiving, and rewarding experiences you could possibly imagine from an outright sportbike. Don’t get me wrong, though, the V4 S is no kitten, it’s more of a properly well mannered beast on steroids.