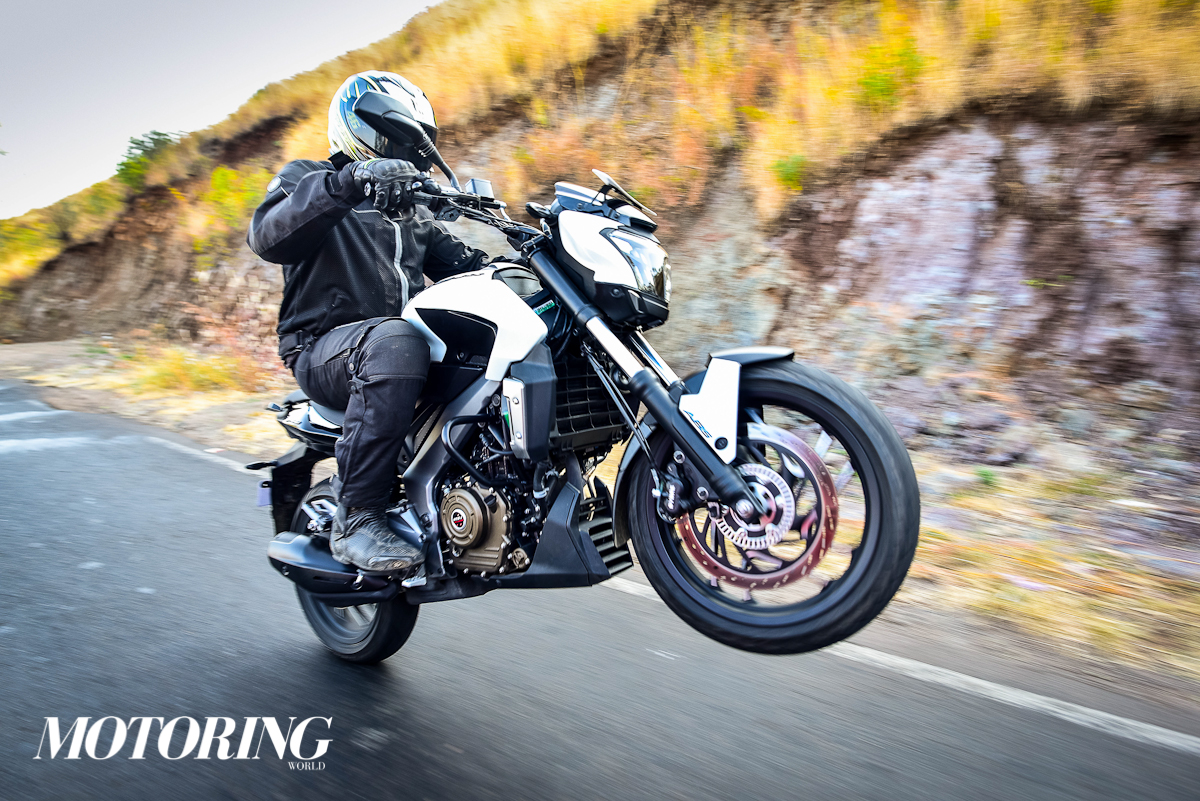 In a time like the one we’re traversing through, a motorcycle is known for what it does rather than what it is. The insistence is, more than ever before, on the machine’s ability to serve a purpose, to focus and to achieve. This can never be a bad thing, considering the evolution of the motorcycle treads in step with the evolution of the rider. It does, however, leave a gaping void, something that’s an understandably blink-and-miss aspect of any form of automobile — intent. It’s not about what a motorcycle can do. It’s about what a motorcycle should be.

The shiny all-new Bajaj you see here subscribes to the latter. Here’s an all-new platform of motorcycle that’s decidedly lower on power than it could have been. It also weighs a lot more than it could have, especially considering it’s manufactured under the same umbrella as its engine donor is. And nobody reached for a tin of orange paint to coat its wheels with. This is not simply a mere occurrence. It was a conscious decision made under the hot glowing bulb of the drawing board. It was all part of a plan.

The plan materialised in the form of a stunning machine called the Dominar 400 and it has everything, from the Bajaj Pulsar to the Ducati Diavel, landmark machines that have served as either experience or inspiration to thank for its conception. This is point-blank apparent in its design, starting from its all-LED headlight (a first) to that gorgeous tail section, but a lot of it also lies beneath its skin. To say that the Dominar wouldn’t have been what it is — or wouldn’t have been at all — without either the Pulsar or the Diavel wouldn’t be off the mark. One motorcycle did the groundwork in terms of pushing Bajaj to redefining its own potential as a manufacturer and the other brought about a substantial degree of introspection towards this very constantly-evolving potential. That either motorcycle is a phenomenal success story isn’t exactly debatable, is it?

The contemporary fuel tank I’m gripping with my knees right now belongs to a relatively new but increasingly trending format of motorcycle — the power cruiser. It’s not a muscle bike nor a track tool, not a cruiser nor a sports tourer. The power cruiser is a heady mix of visual mass, gripping but not overwhelming performance and an overall long-legged approach to motoring. You could say the Dominar is only the second power cruiser in the world — any guesses on which the first one is? — and you’d be spot on. Is there a sleight of hand we haven’t noticed, though? Or is the Dominar all about real substance? No harm in finding out, is there?

The digital speedometer is a numerical blur. It reads ‘127’ right before I stop looking and squeeze the brake lever, tipping the Dominar over to its left. It is, by all means, not the sort of corner you would want to take on an unfamiliar motorcycle. But I’ve put too much faith into it and now it would be nice if it lived up to it. Is it supposed to? Why shouldn’t it? Oh darn it, we’re through. It’s as if nothing ever happened. I can’t say I wasn’t smug when I learnt about its 182-kg kerb weight, but where that weight disappears when the Dominar is on the move is a mystery. Would you believe me if I told you this was the first-ever corner I attempted on it? You will, when you find out for yourself,  I suppose.

That, I am led to believe, is the essence of the Dominar. It’s not a motorcycle that wants to overwhelm your senses but something that will help you indulge. It doesn’t want to slip away from underneath you but rather wants to strike a chord. The Dominar, contrary to what its name suggests, is not about domination at all — it’s about alignment, cordial evolution and generally about having a good time astride a motorcycle. What can possibly go wrong with that sort of intent?

Nothing in particular, especially when you know it has the specifications to back its philosophy. Housed within that perimeter frame is a 373cc, single-cylinder, fuel-injected and liquid-cooled mill (sounds familiar?) extracted from the KTM 390 Duke. That’s about where KTM’s contribution to the Dominar ends since this motor has not only been tuned down but also, on the face of it, de-specced. The Dominar was never intended to be a Duke-beater and so it was configured to produce 34.5 bhp at 8000 rpm and a wholesome 3.5 kgm of torque at a lower-than-the-Duke 6500 rpm. Along with the addition of two spark plugs, the 4-valve layout was retained in favour of already-proven performance and also emissions, although the Dominar’s motor had to make do with a single overhead camshaft (as opposed to the KTM’s DOHC unit). A 6-speed gearbox and a slipper clutch were added to the mix to complete the package and the overall result, as you can see for yourself, is a spec sheet that’s impressive but not overwhelming. Just like the Dominar itself, then.

Has Bajaj gone down an identical route with the cycle parts as well? Yes, certainly. The Dominar gets a fat 43-mm telescopic fork instead of an inverted fork — that’s a four-fold hike in component cost slashed right there — and Bajaj has been conservative with the choice of materials that went into the making of the frame and the swingarm. It’s not that using a higher grade of materials is beyond Bajaj in any way, but given that an aggressive price tag was mandatory, certain measures had to be owned up to at the expense of a weight gain.
I see no demerit in this, since the Dominar is not about inch-perfection or about shaving precious milliseconds off lap times, but more about a wholesome riding experience. It’s something reasonable, in other words. That aside, it features a dual-spring monoshock (wait, what?), a disc brake at either end, brand-new MRF rubber specifically designed for it, dual-channel ABS (disengageable, means very tiny stoppies) and an overall setup that’s tuned more for stability rather than razor-sharp reflexes. Fair enough.

What this translates to on the road, however, is far from what you’d call a compromise. The Dominar feels like a substantial, poised and committed motorcycle, just not in an edgy sort of way. Is the Dominar an intense motorcycle? Of course it is. But it’s important to understand that intensity is not the same as seriousness. It’s not about deadpan expressions and a brooding psyche. Intensity is about a measured amplification of emotions, about confidence and about standing one’s ground. To put it into perspective, it’s like the difference between the TVS Victor and the Yamaha RX100 when it comes to wheelies. Either can do it with distinct ease, but it’s the Yamaha that has the intensity.  I hope I haven’t deviated too much  and without reason. Oh, and speaking of wheelies, the Dominar seems to  love them. I tried about fifty-four  of them over the course of two  days, much to the displeasure of the Bajaj management.

To tell it like it is, the Dominar starts off feeling rather potent even at idle. The engine note seems busy and a quick twist of the wrist reveals a crips, near-Kawasaki Z250-like howl. It feels like a twin-cylinder motorcycle and its centre-forward-heavy (sounds like a football formation, eh?) mass amplifies this feel. First gear slots in with an audible ‘thunk’ and as you roll on the throttle, eases into a good headstart, making way for the remaining five gears. Aggressive use of its ample torque spread will see you go past 70 kph in 2nd gear and a shade over 100 in 3rd. The Dominar banks heavily on its bottom-end and mid-range grunt and this shows in how it’s geared as well. Gears 4, 5 and 6 take care of business beyond 100 kph with ease and, on a good day (but preferably not a public road), you can push it to a 148-kph claimed top speed.

Then again, the Dominar isn’t exactly about frantic numbers — it’s more about substantial motorcycling. This effectively means its engine and gearbox are mapped to make riding effortless but not uninvolving. It can cruise at 110 kph without a fuss and in 6th gear, you can roll on the throttle from around 50 kph, which is not bad at all considering you have five other gears you can do the same speed with. What’s beautiful about this engine is the meaty layer of torque it’s endowed with, all of which is perfectly suited to the kind of riding our roads allow. It never feels out  of breath all the while never leaving you gasping for breath either — fair trade, right?

That said, if you do feel the urge to hurry things up, the Dominar will not disappoint one bit. A 148-kph motorcycle is fast, all right, and it doesn’t take much to get up there. Bajaj claims the Dominar can clock 100 kph from standstill in 8.23 seconds, which is about the same time as it took you to read this sentence. Impressive, for something that weighs 182 kg and is not a faired wannabe-superbike.

So, if it’s fast, poised and pulls wheelies, it surely must be a bit uncomfortable, no? This is where the power cruiser format comes into play. The Dominar is, firstly, not a pint-sized motorcycle. It’s an elaborate chunk of metal and plastic, and its visuals do little to hide that as well. The reason the Dominar’s motor feels unstressed and high-speed-happy is because the rest of the motorcycle does the exact same thing (and not the other way round, more importantly). That was the brief handed over to the people behind the Dominar and the result is a responsive, pliant but far-from-lethargic setup that’s as enjoyable on perfectly layered tarmac as it is on bumpy B-roads. The equilibrium between excitement and composure might certainly have been a labour intensive task, but those long working hours have certainly paid off, for the Dominar is honestly a revelation over most road surfaces you will encounter on it. Tempted to test one yourself? Do make sure you try all of the ten settings on the adjustable monoshock to see which suits you best.

Is there anything not to like about it? Yes, a few mostly-subjective things. First is the braking or rather the braking feel, something that could certainly do with a wee bit of sharpening, without taking away from its progression. The option of turning ABS off would have helped as well — I’m sure there are a lot of analogue riders out there who don’t quite mind pushing their luck. Lastly, since the Dominar is essentially a highway motorcycle, a few tactical bits — luggage hooks and a tail-mounted rack, perhaps a set of cool-looking panniers, too — and the option of a taller windscreen might have rounded off what is a step in a fantastic, multi-dimensional direction for Bajaj.

It’s this last bit — not only what it already is but also what it can evolve into — that’s most promising about the Dominar. The enveloping impact of the power cruiser format coupled with the path Bajaj has chosen with the Dominar can only spell brilliant times ahead for those seeking affordable thrills in an uncompromised package. You’d be fair in expecting Bajaj to roll out a 650cc Dominar in the near future and, at the same time, I can’t wait to find out what a sub-250cc version of it will be like to ride. At Rs 1.44 lakh (ex-showroom, Mumbai), the Dominar is undoubtedly good value, but it’s the potential and performance of this motorcycle that is far more appealing than even its affordability. Found your next new motorcycle, then? It’d be nice if you thanked those chaps from Ducati first.