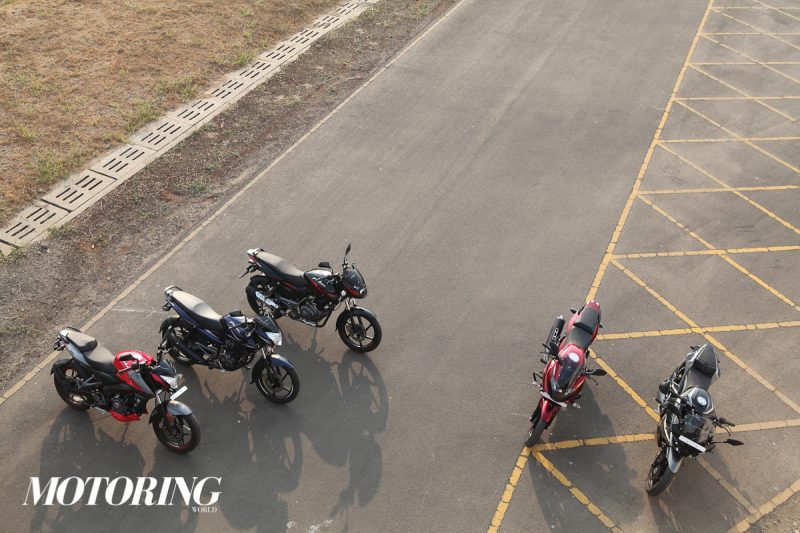 Back in 2002, the Bajaj Pulsar was a two-bike operation. That was all it took for the erstwhile scooter manufacturer to rewrite the rules of performance motorcycles in India for the years to come. Fifteen years later, the Pulsar derives itself from an unfathomably large parts bin comprising five different motors, three sets of front forks, four sizes of disc brakes, five specifications of tyres and about three dozen spark plugs. Okay, so the last bit is just Bajaj’s way of doing engines, but it still is a hugely complex line-up which has a lot to live up to, including its own legacy. Has all this BS IV-compliance talk resulted in a worthy evolution of the most-popular fun-to-ride bike nameplate of our time, then? Let’s find out by tossing five questions at each of them.

Why should you buy one?
The 135LS is a cooler way of living a frugal lifestyle. Its edgy looks definitely set it apart from the Glamours and CB Shines of the world and its perky 134cc, 13.3-bhp motor is definitely a hoot in the city. It’s not a mundane commuter motorcycle and its ride and handling definitely show signs of its inherent sportiness. Buy one if you like pulling wheelies on your dull commute.

Why shouldn’t you?
Because it’s no longer the Pulsar 135LS we knew it to be. A lot of this once-delectable motorcycle has been commuter-ised, so to speak, and this includes the long seat (no longer a split unit), a conventional grab rail, and overall riding ergonomics that don’t really belong on a motorcycle with a ‘Pulsar’ badge. Is it fun to ride? ‘LS’, for those who came in late, stands for ‘Light Sports’ and while, at 121 kg, it is indeed very light, the ‘Sports’ bit seems to have aged a bit. I’m going to tell it like it is — the 135LS is a huge disappointment considering it used to be the most fun Pulsar of the lot in its original guise. Can something be done about this, please?

Competition to the Gixxer, eh?
Pah! Hardly! Yes, it says ‘150’ on the tailpiece, but that’s not what it actually means in Pulsar speak.

So what does it mean?
The Pulsar 150 is now more of an everyday performance motorcycle that’s nearly a commuter — a stark contrast from when it used to be the flag-bearer of the Pulsar family, with the 180 being a bit ‘extreme’. It therefore now competes with the Honda CB Unicorn and Hero Achiever, and it’s definitely the liveliest of the lot. Its 14.6-bhp motor is crisp if not Honda-smooth, but it works for the kind of urban thrasher the Pulsar 150 really is. Buy, ride, sell, repeat…

Why avoid?
If you’re buying it purely for the purpose of commuting, why not give the lovely little V15 a chance instead? Also, if you want a Pulsar for nostalgia’s sake (unlikely, but just in case…) you’ll be better off with either the 180 (it’s missing from this story for a good reason — stay tuned for more!) or the 220, both of which cost only a few hundreds more in EMIs. Oh, and those decals are just so drab, don’t you think?

Is it fun to ride?
Not in a contemporary 150cc way, but then this format of the Pulsar has been around for donkey’s years and it grows on you. I can’t help but say it feels dated (for a Pulsar, not so much otherwise), but throw a few corners at it and it does entertain.

Oh, shoot! It’s back?
Duh! Stop pretending — of course it’s back and I’m happiest about this one.

But the Duke is better, no?
Oh, stop it! The Pulsar 200NS is nothing like the Duke 200 (already replaced by the new-gen model by the time you read this) and that’s a very good thing because not everyone likes gruff, high-compression engines. The 200NS’ 199.5cc, 23.1-bhp motor is smooth, linear, refined, effortless and fast, and I think it’s the best-looking Pulsar of the lot, too. The NS is aggressive, but not in an in-your-face way and its handling and braking (it gets a 280-mm disc, the second biggest in the range) allow for some serious saddle time.

Anything not to like?
Nothing. The 200NS is a Pulsar you can’t go wrong with, whether you want it for weekend getaways or just to pull wheelies outside college.

Is it fun?
It’s the most fun Pulsar in the present line-up. I said ‘present’.

This one hadn’t even aged…
Yeah, but BS IV compliance isn’t optional anymore, no?

How is it any better?
Well, it didn’t have to get better. All right, so Bajaj has lent it a set of racier decals and some new colours, but that’s about it. All the bits within the fairing are the same and what you, therefore, get is a fast, outrageous-looking Pulsar that’s got the performance to match its full-faired styling.

This or the R15?
For outright speed, this. The R15 is definitely sharper around corners, but the 24.1-bhp RS 200, although less MotoGP-inspired, is still a thrillingly quick real-world motorcycle. You can very well fulfil your knee-down fantasies on the RS 200 and it’s got all the bells and whistles you can ask for — optional ABS, a 300-mm petal disc, projector-style headlights — making it quite a value-for-money machine.

All prices mentioned are ex-showroom, Mumbai.