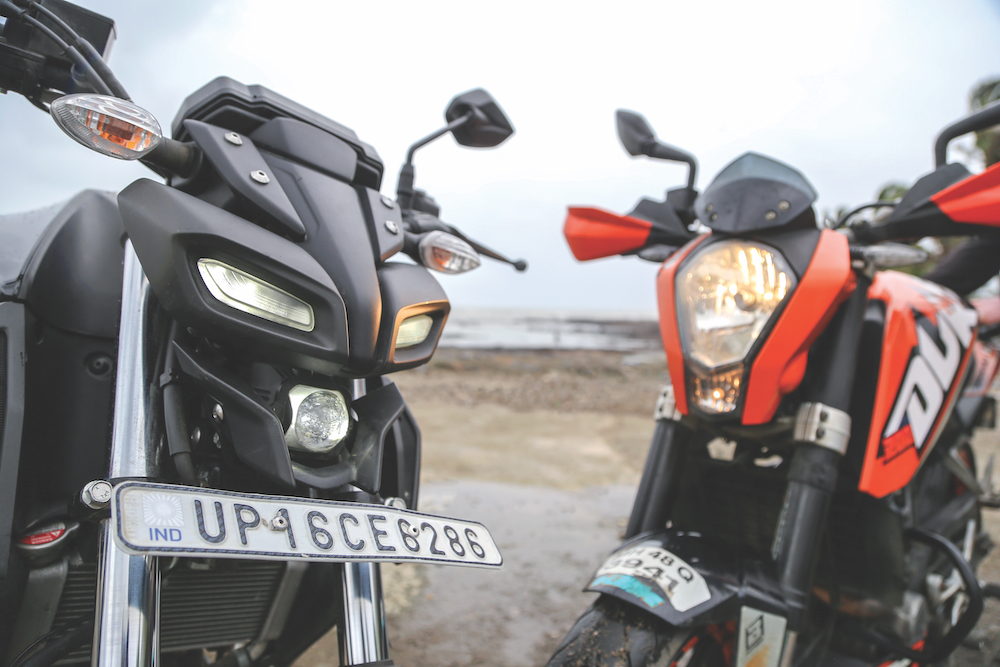 Considering that the general lot of Indian parents aren’t motorcyclists themselves, it’d be irrefutably difficult to justify the numbers these two motorcycles have on paper to them. I assume it’d be a much easier task asking them to find you a wife. Unless they’re already fascinated with motorcycles, have piles of unaccounted money just lying around, or you’ve already gotten yourself a decently paying job, these motorcycles will remain a fevered dream. But let me assure you, the wait will be worth it. If either of these motorcycles have you salivating at the thought of them, you’ve got your bearing right. The 200 Duke and MT 15 aren’t motorcycles you buy out of sensibility. You buy them because your teenage hormones haven’t died down yet. Or maybe they’re just about kicking in. 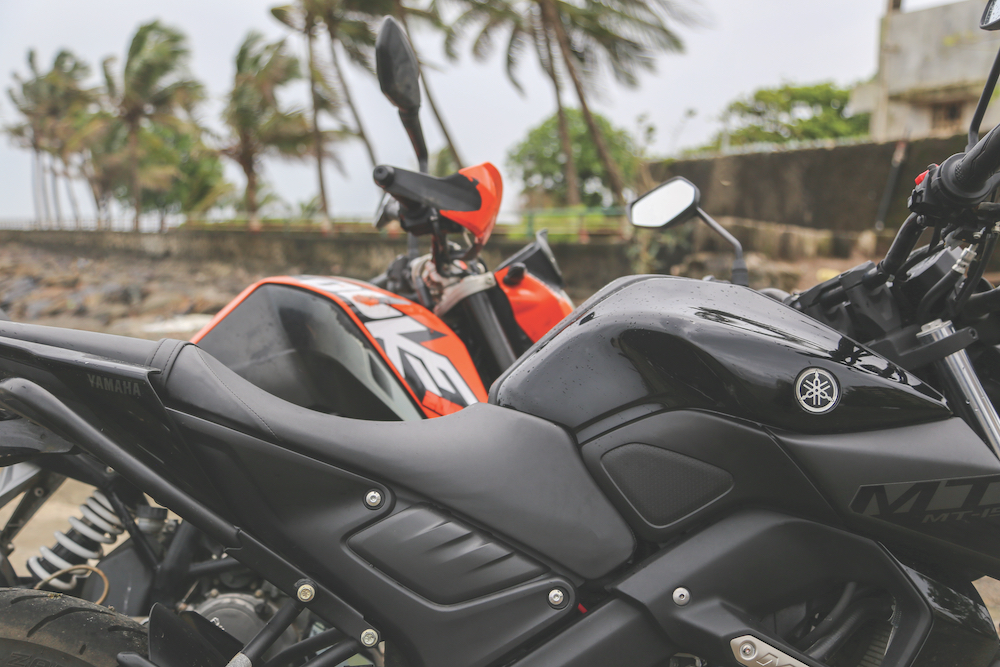 Now I’ve gotten rather accustomed to riding heavier, more powerful motorcycles over the years. But there’s no denying that if it has two wheels, I will have a great time riding it, irrespective of the brand or the specifications. KTM and Yamaha have primarily been focussed on performance for decades now. But more importantly, the MT 15 and 200 Duke are your introductory tickets into the world of performance motorcycling. You could argue that KTM also has the 125 Duke. And despite its edgy handling, that engine is, well, for lack of a better phrase, quite insipid. You could also argue that the other 200cc motorcycles available here are also decent performers, and so much cheaper, too. Yamaha’s own FZ25 is cheaper than the MT 15 and has a whole 100cc of more displacement. 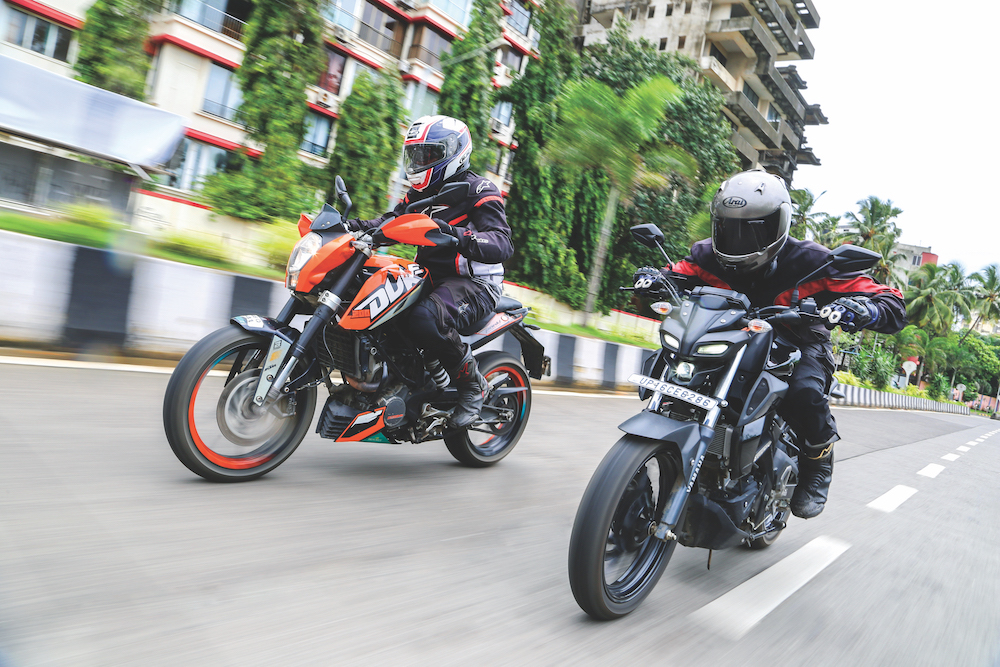 But let me explain why the 200 Duke and MT 15 stand a cut above the rest, at least according to me. It’s because I’ve ridden all of these motorcycles on the race-track. Despite most of them being pretty good handlers, the Duke and MT are far superior when they’re closer to the limit. But these are also bikes you’re going to be living with on a daily basis. And trust me, things get a whole lot more interesting if you choose to live with either of these scrappers. So, with an almost Rs 25,000 price deficit, can the MT dethrone the Duke?

Now I won’t bore you with numbers and all that, because the most important factor with these two is fun. And fun comes from that all encompassing sensation, feel. We’re all pretty familiar with the 200 Duke by now. It’s got a fantastic chassis, a feisty motor, and it looks just so rad. We already know that it’s quite like a jack russell terrier on near-lethal doses of caffeine, at any given time. You’ll also have to work the gearbox like the apocalypse is coming. I rode this bike after almost two whole years. Trust me, it hasn’t gotten any less exhilarating to ride. But then, that’s exactly what the Austrians intended for it to be – a bright orange hellion. The more you ride this motorcycle, the deeper you’ll delve into KTM’s ‘Ready to Race’ philosophy. 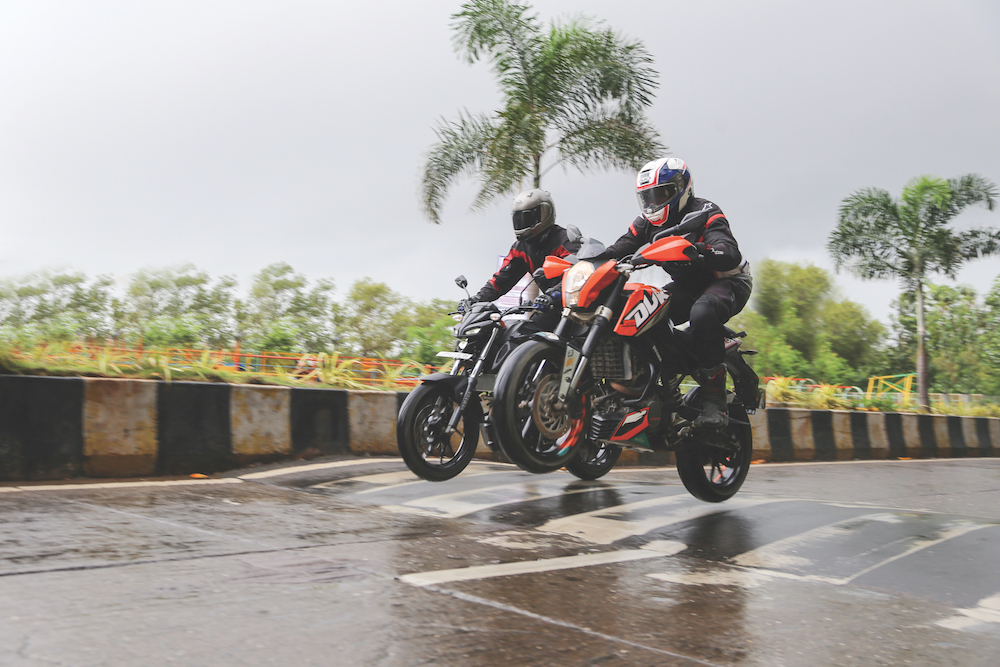 Yamaha’s MT 15 is the new kid on the block. It’s derived from the R15 V3, and it is nothing short of a spectacle. The grimacing samurai face is a masterpiece and it looks like nothing else you’ll see on Indian roads. Despite its power deficit when compared to the Duke, Yamaha’s Variable Valve Actuation certainly gives you the top-end oomph you need to keep things engaging. It’s also so much more relaxed when you need it to be. That doesn’t mean in any way that it wants you to ride it in a relaxed manner. This little tyke will yank the aggression straight out of you simply because of how lively and compact it is.

Being this compact, however, does have its shortcomings. Don’t get me wrong, the MT 15 has a brilliant chassis. In fact it’s one of the most nimble motorcycles I’ve ever ridden.  But it’s just a little too nimble for my liking. Although directional changes are swift as lightning, it also translates to a bit of twitchiness once the speeds climb. You’ll experience this if you encounter bumps in the corner, or even in a straight line for that matter. It isn’t a deal-breaker, per se, but it just can’t match up to the Duke’s rock-solid stability and predictability when you’re really pushing it. 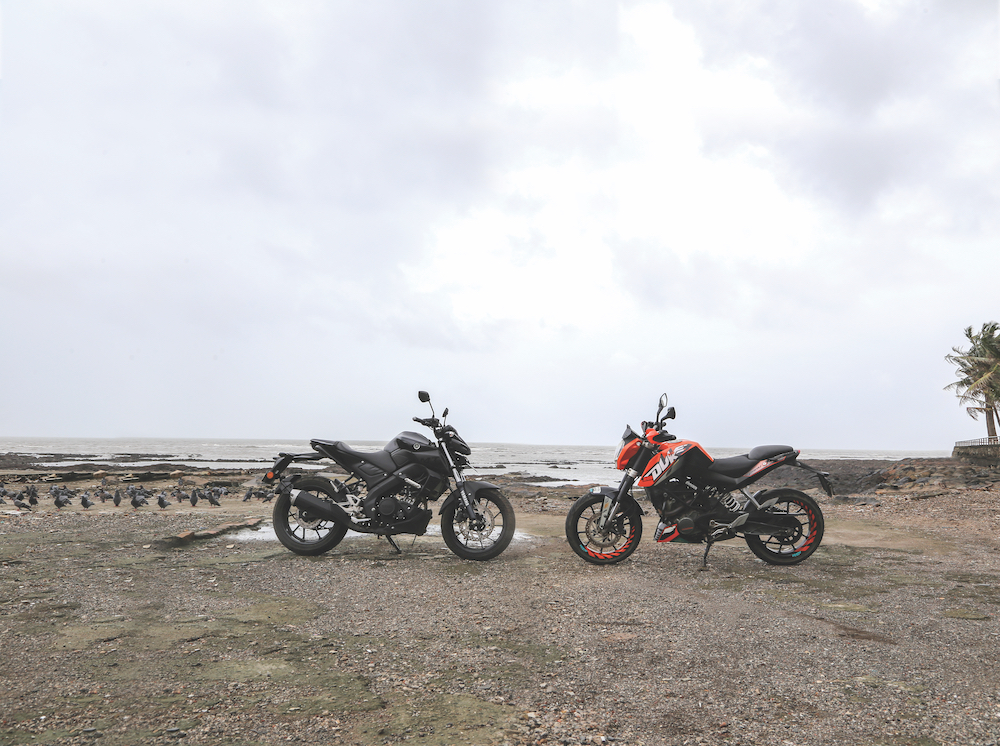 Venture outside city limits and again, here’s where I’d choose the Duke. And this has a lot to do with the rider triangle being a little more stretched out. Granted, both of these motorcycles have slightly aggressive seating postures to make the riding experience more engaging. But on a longer ride you don’t want your legs to be crunched up like a perched partridge. The main reason for this is that the seat-to-footpeg distance on the MT 15 is noticeably less. You could argue that it gives the MT 15 better cornering clearance, but trust me, the Duke’s is just as good. Of course, this wouldn’t really be much of an issue if you’re a compact rider yourself. 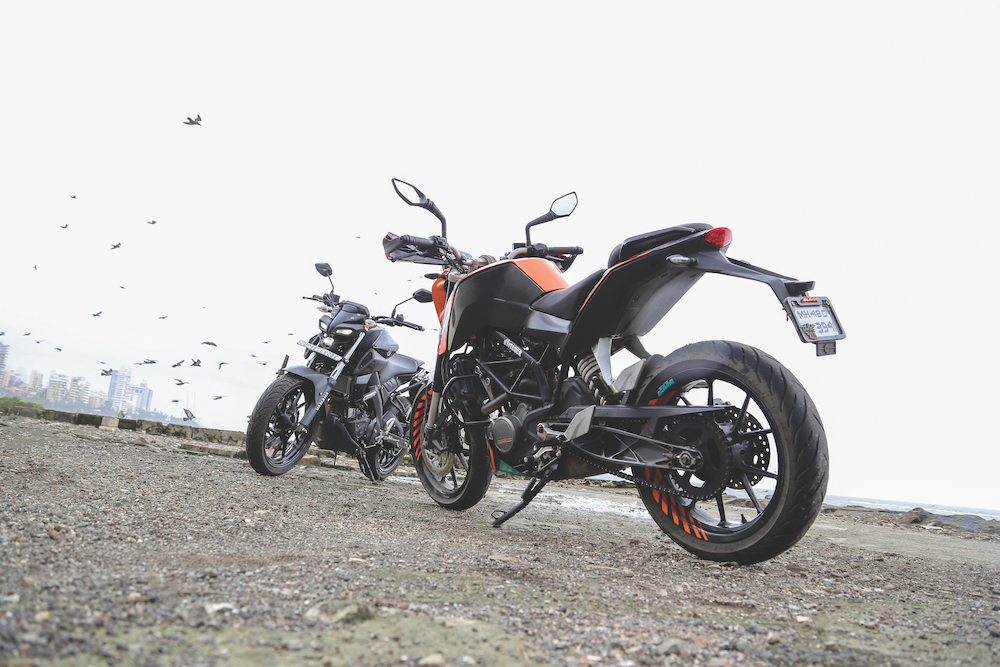 These are undoubtedly two of the most fun small displacement motorcycles that money can buy. Since sensibility isn’t really in the arsenal for these two, I can’t really comprehend why Yamaha India chose to opt out of the USD forks and aluminium swing-arm that the international models get. Sure, the MT 15 would get a little more expensive. But for a performance focussed naked like this, why in heaven’s name would you want to compromise on handling? I’m sure a lighter, more stable motorcycle would be a more likely weapon of choice for your everyday hooligan. But, if you bleed blue, you bleed blue. There’s no taking away from it being a great introductory performance motorcycle that looks just stunning. But despite the orange scalpel having a few years under its belt now, it’s still the sharper of the two. With it currently being re-sharpened under Austrian whetstones, I can only imagine how much more fun the updated 200 Duke will be.