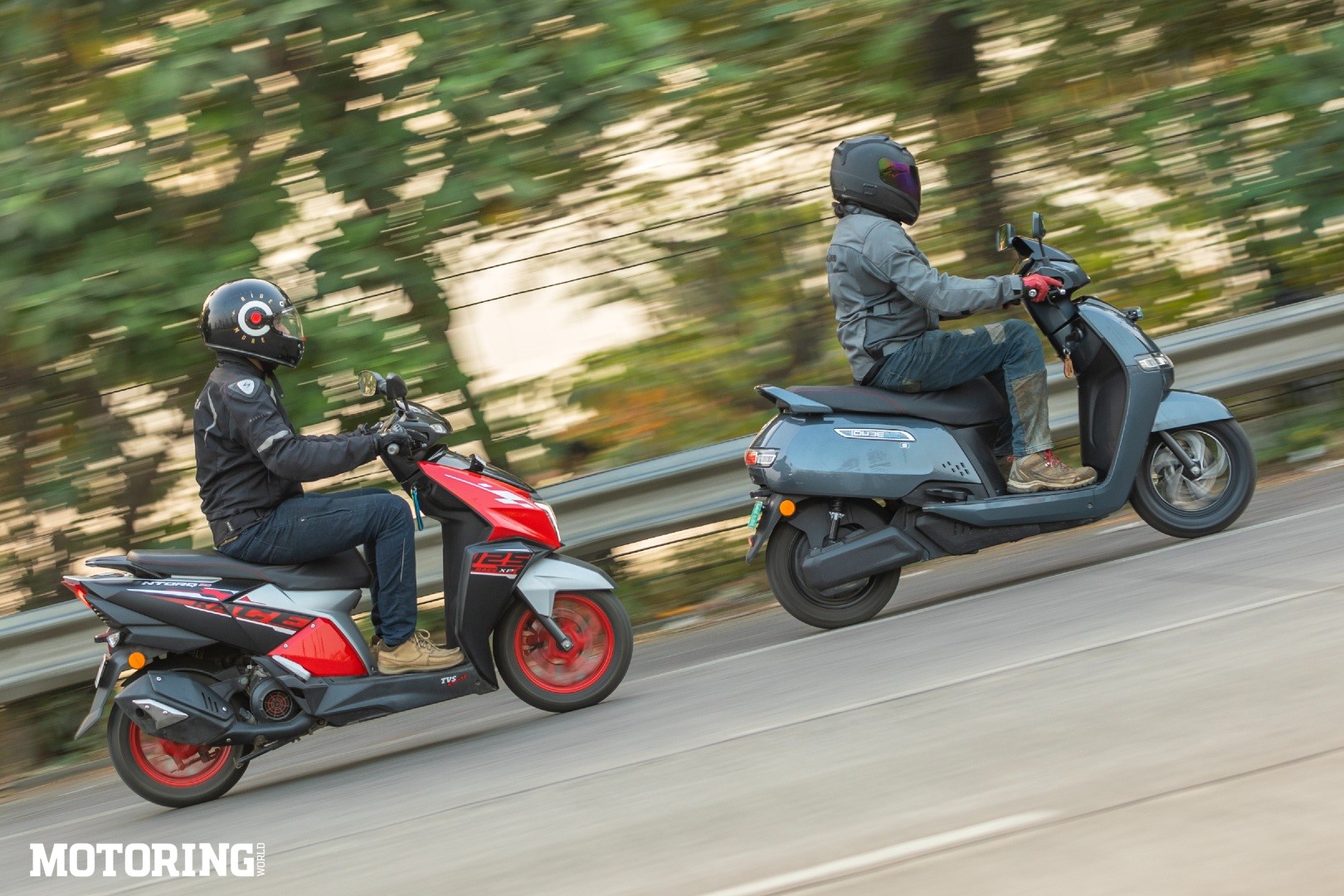 In the current scenario, I think it is safe to say that scooters have become an indispensable part of the Indian two-wheeler industry, so much so that they are gradually becoming a household commodity. The first vehicle to get purchased in a family is no longer a motorcycle, but a scooter. It is the convenience that it has brought into our lives, and the multiple roles it can carry out. 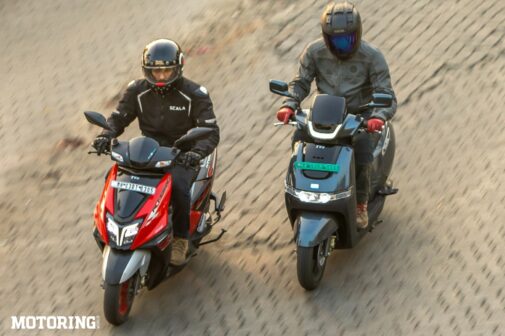 To provide some perspective, besides the generic purpose of ferrying the rider and pillion, along with the benefit of concealed storage space and gearless operation, scooters are extensively used for transporting goods — by delivery agents, and recently, even as a taxi to get to places and what not. And with everyone turning their attention towards electric mobility, every two-wheeler manufacturer needs to ensure a smooth transition into the future, while continuing to have a strong foothold in the present. One such name that has been managing it well so far, is TVS Motor Company. Besides its diverse portfolio of two-wheelers, these two machines are among the best examples out there, in their respective segments.

The NTorq 125 and the iQube are of the same family, but different in how they move people. The former is one of the top-selling 125cc scooters in the market, thanks to its sporty character and punchy performance. Ever since the Ntorq was introduced, it has been popular among college-goers and young working professionals, mainly because it breaks away from the conventional perceptions associated with scooters.

Besides being known for manufacturing two-wheelers, TVS also has a healthy motorsport lineage, which has trickled down to the NTorq 125, and has helped in achieving that popular peppy nature. The iQube, on the other hand, is what the future seems to be for scooters that will roll out of the TVS factory. While the market is being flooded by EV brands popping up now and then, the Hosur-based two-wheeler giant has taken its sweet time to develop the iQube. The result is that the wait has been worth it. From the fare share of EV scooters I have ridden so far, the iQube has delivered the best experience. To me, it is the closest an EV has gotten to providing the same experience that one gets while riding a petrol-engined scooter.

Riding the NTorq, I thought of the time when I had one for an extended period (it had come for a shoot) sometime back. I remember it like yesterday, the kind of fun I was having riding it through all possible traffic scenarios and road conditions. From filtering through slow-moving traffic, to blasts across open stretches, to being stuck in bumper-to-bumper traffic, I have never experienced a dim moment with the scooter. Not many scooters are capable of breaching the 100-kph mark, but this one does, and it can sit there without any hiccups. And that says a lot about the kind of refinement and fine-tuning that TVS has achieved over the years. This time around, I didn’t have to ride it as much because the NTorq present on these pages is the same media unit I had ridden before, and it now belongs to my growing collection of two-wheelers. So, it’s a fun trip every time I get on its saddle, thumb the starter, and gas it. And while doing that, the growl of the throaty exhaust makes the experience more engaging.

On the other side of the spectrum, it’s not surprising that the iQube is the complete opposite. Generating nothing, but a dampened whine from the hub-mounted motor, the iQube is like a silent ninja. And while the NTorq was finished in a vibrant red and black colour scheme, the iQube sported a single-tone shade of metallic grey that didn’t look that appealing. But what the iQube lacked in the livery it made up for in design. Like a droid from the future, the scooter has all the correct forms and features that send out the message of being an EV vehicle. The iQube has a curvy and rounded profile, with prominent design highlights like the U-shaped DRL, and the illuminated badge on the swingarm. 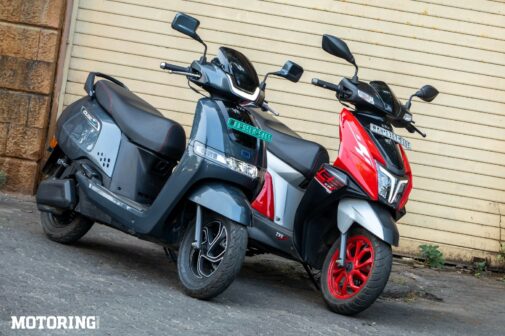 While the iQube is about smooth lines, the Ntorq was probably designed using rulers and set squares. I mean, there is not even a single curvy line on this scooter. There is no denying the fact that the Ntorq draws its inspiration from stealth aircraft. Besides the sharp contours, the faux afterburner vents on either side of the signature taillamp and the aggressive front-end give the scooter a very appealing look. The all-digital Bluetooth-enabled instrumentation comes with Street and Race modes, each packing additional information for when you’re on the go.

While both the scooters ride on 12-inch wheels, the NTorq features a slightly wider profile that contributes to more aggressive lean angles. The NTorq is an all-rounder that can chase speed and slither through traffic with precision. Handling has been a main character trait of the NTorq, which TVS has maintained since its inception. Even the front disk brake has a strong bite that lets one brake late and hard, something that is uncommon with scooters. Through the iterations, the Ntorq has only gotten better, which makes it such a solid machine and a powerful competitor in its segment. 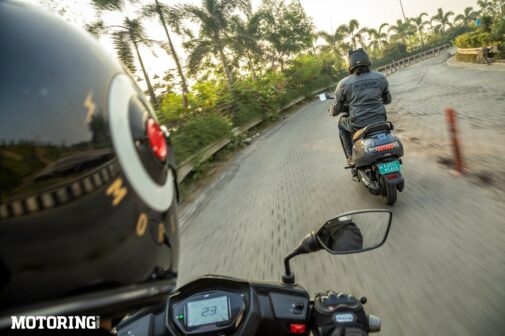 The iQube can also corner, but is better off conducting its activities in a straight line. Since its main focus is to do with green energy, TVS has worked out a very efficient battery regeneration system. So good is it, that through the duration that I had the scooter, I didn’t feel the need to charge it up, or have range anxiety since the DTE wouldn’t budge while being ridden in ECO mode. It was only when I was belting it in Power mode that the range dropped by a good margin. The iQube gets a more sophisticated all-digital colour display that is also Bluetooth-enabled, and also packs additional information and settings to personalise it according to the user’s preferences.

Off the line, the iQube is quick from the word go, but it doesn’t take too long for the NTorq to close the gap and overtake it. In terms of specs, the iQube’s hub-mounted motor is capable of delivering a peak power output of 4.4kW, a rated torque output of 3.36 kgm, and a peak torque output of 14.2 kgm. Once fully charged, the two lithium-ion battery packs are capable of returning a maximum range of 145 km. While the top speed is limited to 45 kph in Eco mode and 78 kph in Power mode, the rate of acceleration, which stands at 0-40 kph in 4.2 seconds, is the same for both modes. 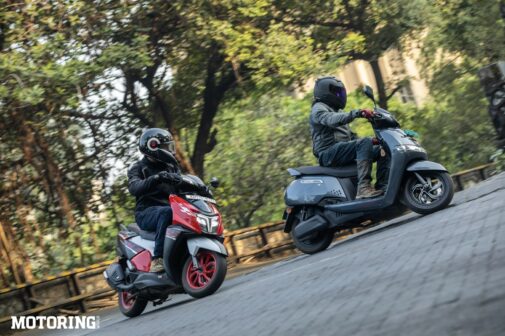 In the case of the NTorq 125, it racks up power figures making it the most powerful scooter in its segment. The NTorq registers peak outputs of 9.25 bhp and 10.7 kgm from its 124.8cc mill. Even the CVT is tuned in such a manner that it changes its character depending on the throttle input. Go gradually on the throttle and it will linearly build speed, but after a certain level, the transmission switches to performance mode, and the scooter starts to accelerate with haste.

Scooters are here to stay, as is TVS, and both these machines are mighty contenders that are only going to become better versions of what they are. To give you a heads up, TVS already has a rally-spec version of the NTorq 125, christened the SXR 160, producing a whopping 20 bhp on the tap, which is crazy for a gearless scooter. 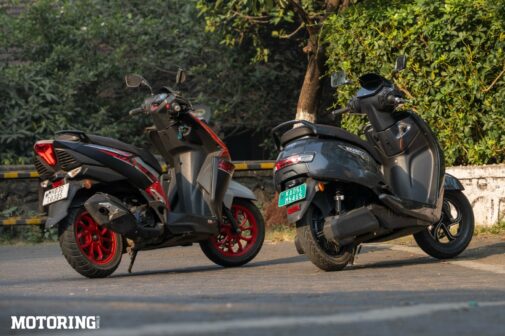 As for the iQube, it is the first EV from the Hosur-based two-wheeler giant, which means there is still a lot to be offered. Interestingly, despite the different hearts that propel these scooters, both share a very similar on-road sticker price. While the NTorq 125 Race XP retails at Rs 1.15 lakh, the iQube is marginally expensive at Rs 1.16 lakh, both on-road, Mumbai. Coming to the matter of choice, it doesn’t matter which one you pick, both are fantastic machines built keeping quality, purpose, and longevity in check. As for me, I already have the NTorq 125 added to the garage, and if the need arises to add an EV, the iQube will undoubtedly be the one to pick.