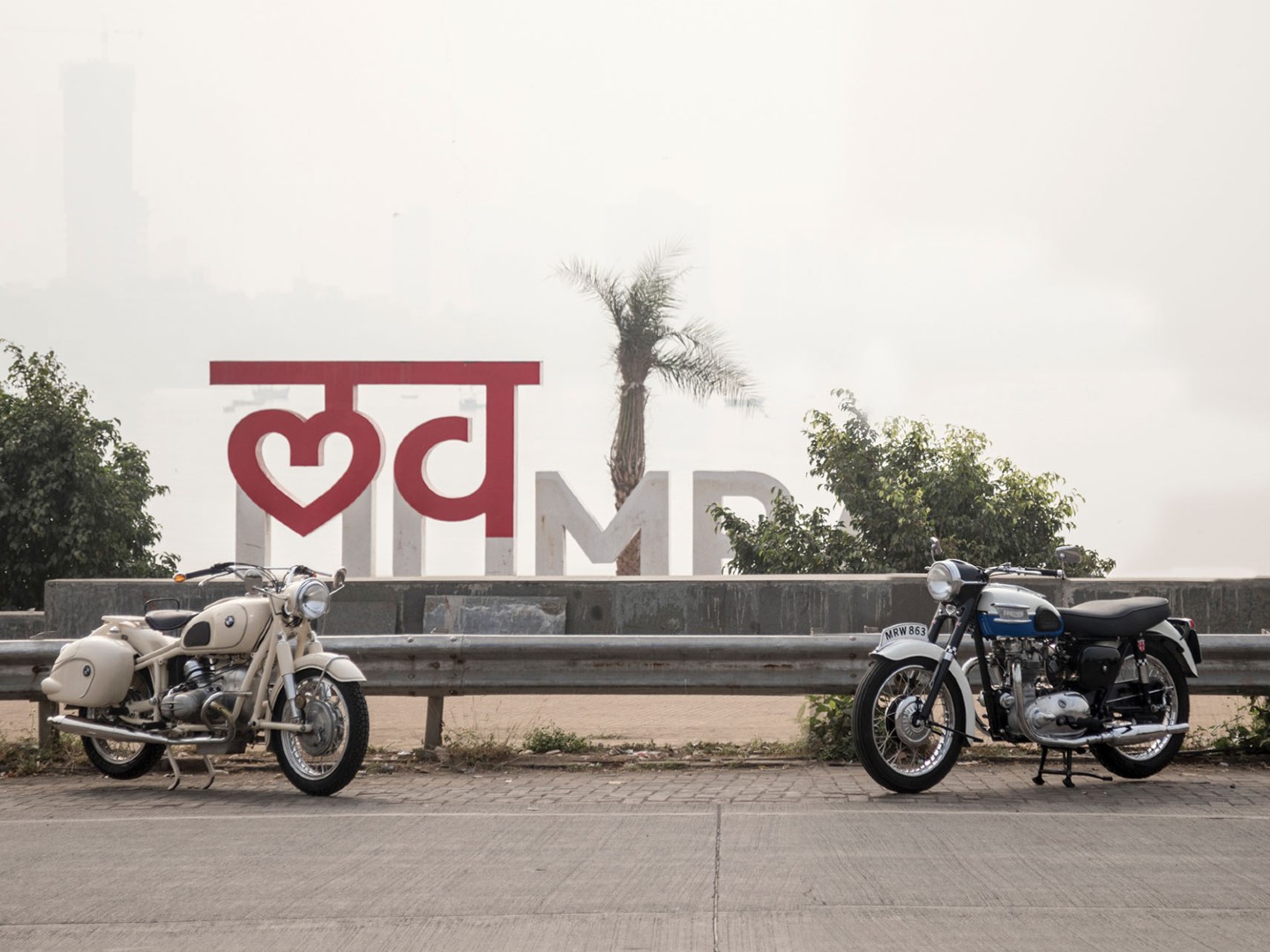 Engineering, simply put, is the science of finding innovative remedies to technical problems present all around us. To get heavy things moving, logs our predecessors used logs. Eons later, someone with a creative mind and who was good with a saw chopped those circular cross-sectioned logs, and the first wheels were created.

Today, thousands of years later, we’re still rolling on what are essentially logs hacked along their cross section, albeit improved upon a fair bit. Engineering is a wonderful thing, indeed, and apart from the solutions it provides, is driven by the minds implementing it. Therefore, although the task might remain the same, the approach — and the consequent resolutions — will depend solely on the person setting out to get things done. 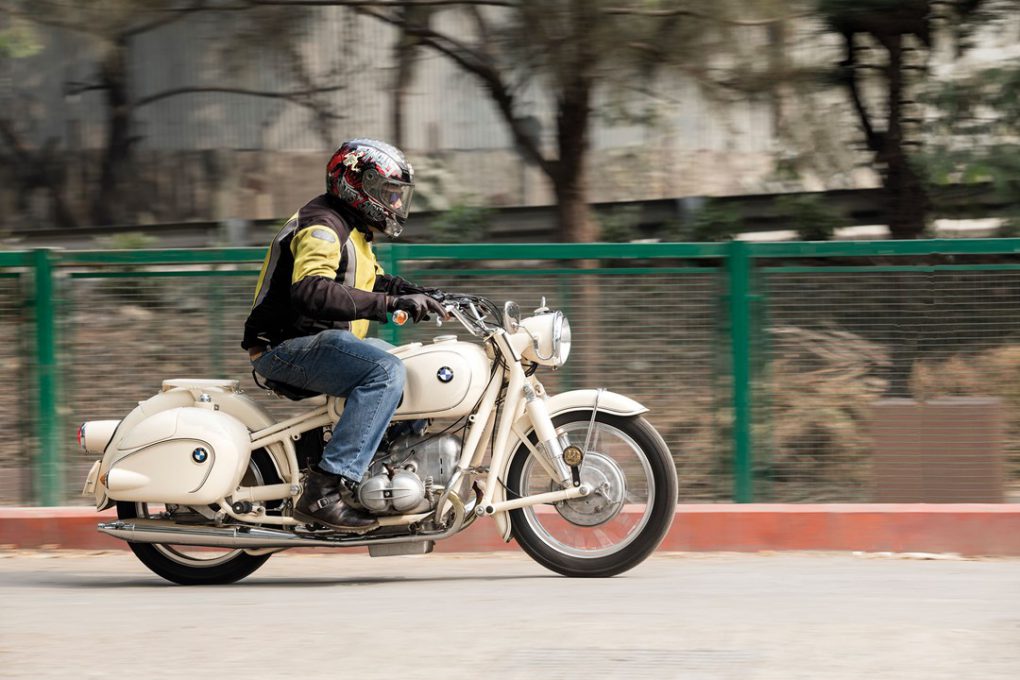 When motorcycles were first built, all of them were single-cylinder machines. But almost instantly, motorcyclists wanted to go faster and the quest for more power began. The simplest way to do this was by increasing the cubic capacity of their engines and the thumper was born. But as with anything in life, there were limitations and engineers realised that going past 500cc on a single resulted in motors that hated to rev quickly and were severely prone to vibrations. So, the large displacement was broken down by spreading it across a number of cylinders. A 500cc twin sported two 250cc engines latched together by a common crank and crankcase. Lo, and behold, the age of the multis was born.

Although a lot of motorcycle manufacturers simply put in engines from cars onto bikes, this was not sound engineering because car motors were heavy, difficult to package and were designed for different running parameters. The need was for a high-performance engine that was light and compact, and engineers all across the world dug in deep and the results of the choices they made all those years ago are still around today in some form across the marques who have stuck by them.

The Americans chose to go with V-twins, the Italians at Ducati preferred the L-twins, while their counterparts at Moto Guzzi decided on the transverse V-twin. The Brits, all thanks to the efforts of the venerable Edward Turner and his wonderful Triumph 5T Speed Twin, came to be known for their parallel-twins and the Germans at BMW felt that the horizontally-opposed boxer format was the way to go.

Now, I knew that classic motorcycle enthusiast and friend of the magazine, Jazeel Mehta, owned several fine steeds and among them were fine specimens of a 1959 Triumph Tiger T100 and the other was an immaculate BMW R69 from 1955. I thought it was a great story in the making if we rode both these iconic representations of their makers and although Mehta couldn’t make it as he was out on holiday, the trusted caretaker of his bikes, ace vintage motorcycle restorer Sajid P.M. Sayed accompanied me for the shoot.

By virtue of writing for Motoring World, I’ve had the pleasure of riding other old Triumphs and classic BMWs in the past. But I’d never ridden them back to back and the fact that the approach to big-bore motorcycling by Triumph and BMW back in the day couldn’t have been more different, yet were extremely similar in a lot of ways, was vividly driven home on that day. 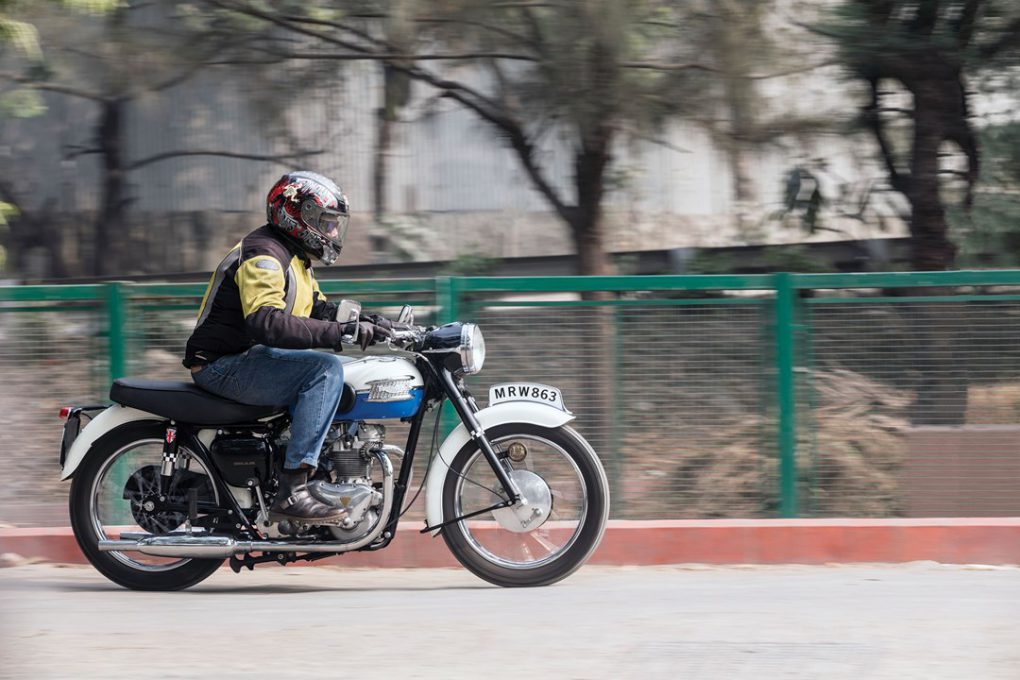 The Triumph T 100, displacing 500cc from its duet of cylinders and producing just over 32 bhp, was good for a top whack of 160 kph as claimed by its maker. It had grown from the Speed Twin and was produced from 1939 (the Second World War disrupted manufacturing and the model was relaunched in 1949) to 1959, after which the pre-unit Tiger was put to rest and the unit construction T100A took the baton forward. In its time, this was the motorcycle that was at the pinnacle of the Triumph range of models that were offered to the general public.

The BMW R69 dates back to 1955. This was the same year that this model made its debut and five years later was put to rest, with the R69S being launched in 1960. Less than 3000 R69s were sold in the five years that they were produced, but it is easy to see why when one realises that the 600cc, 35-bhp R69 was among the most expensive motorcycles being sold at that time and topped the portfolio at BMW Motorrad dealerships. Both bikes were built in the same decade with just four years between their production dates. The BMW displaced a mere 100cc more than the Tiger and the power outputs were almost the same as well. However, this is where all the similarities ended.

Once the Triumph was kicked alive, the parallel-twin sounded rorty at idle through the two silencers and the sound turned into a roar, quite akin to its feline namesake, when the throttle was wrung open. The heavy clutch was pulled in, first gear was engaged by pushing the lever downward and the Tiger leapt forward. Heads turned to see what was coming their way, as the Tiger and I raced by, leaving onlookers dazed with the passing aural barrage.

The Triumph accelerated cleanly, the engine sucking air and fuel in through the Amal carbs. Gear shifts were slick and the brakes were adequate enough to keep panic at bay. When pressed through some of the severely limited corners the city of Mumbai provides for enthusiastic motorcyclists, the Tiger held its lines well. It would be safe to say that the Tiger could very well hold its own even in today’s traffic.

Although the Tiger was gorgeous and loud and old, it still kind of blended into what people would term as familiar. The forks were, well, forks and the engine cylinders are pointing the right way up. The BMW, however, was as familiar to Mumbaikars as pothole-free roads and stellar governance. The engine jugs stuck out from the sides of the motorcycle and the forks seemed to have the rear shocks bolted on for some weird reason. An old timer walking by pointed out the Beemer’s forks and said ‘Rajdoot’ with a grin, obviously referring to the Earles fork design that was also employed by the Rajdoot 175 sold in India. 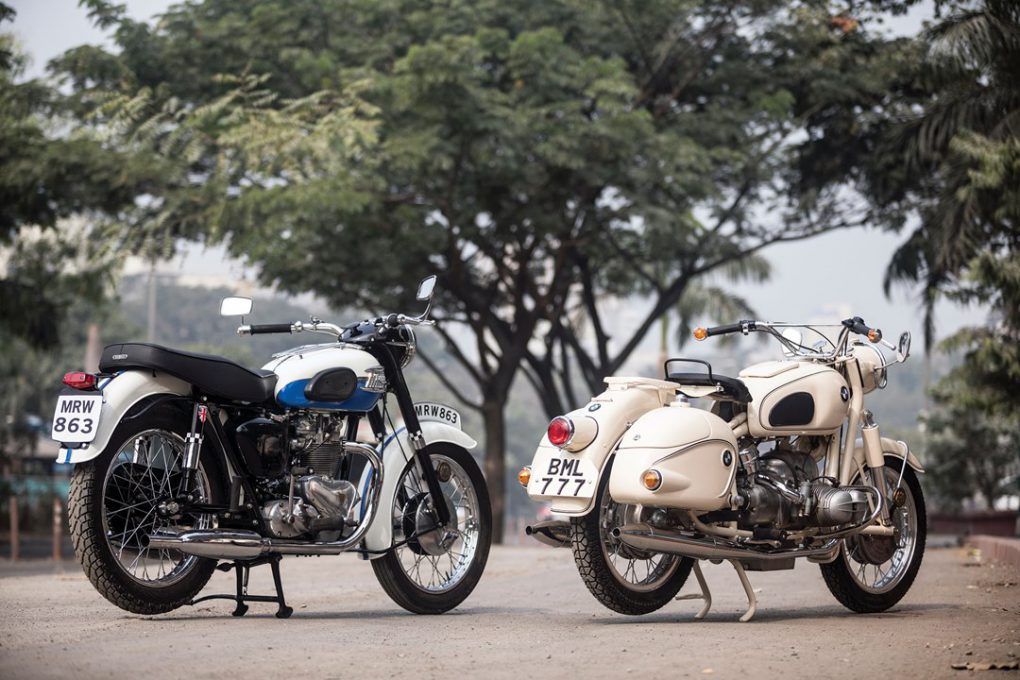 And the eccentricities of the BMW continued. The ‘southpaw’ kick starter was positioned behind the engine on the left side of the motorcycle and pivoted in the same axis as the rear wheel axle, which was turned by a propeller shaft encased into the right side of the swingarm!

But this was all done by BMW because they were out to build a tourer designed for gobbling large distances and that became apparent the moment I jumped onto the Beemer after riding the Triumph. The R69 was way more silent than the Triumph. Sure, the Triumph was boisterous and loud, but after a couple of hours, all that hooliganism that was once fun became painful. I slid my feet onto the pegs, each one nestled behind a cylinder. I have large feet and it took some getting used to in order to find the precise position which would ensure that the soles of my boots could access the controls yet maintain enough distance from the air-cooled blocks. 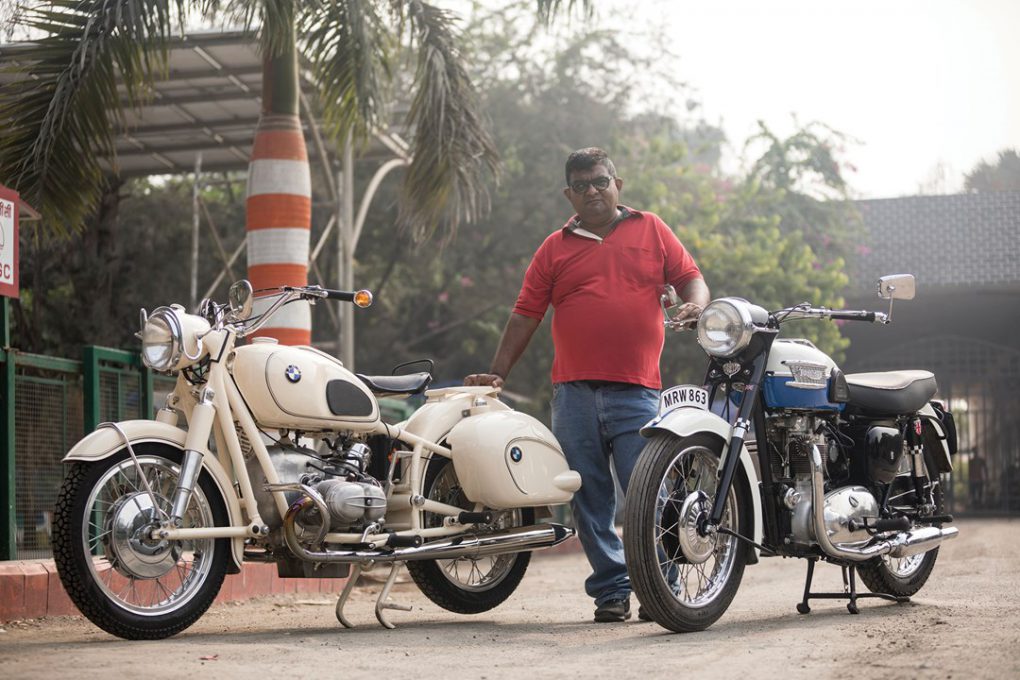 I plugged the R69 into gear, and with a short lurch, we were on the move. The clutch was light and the gears clunked into place with a mere dab on the lever. The gentle pendulum-like sway at idle caused by the movement of the two pistons vanished as the engine revs kept climbing and the motor sounded like the distant drone of a propeller-driven aircraft flying overhead. It never got intrusive and it could never substitute for a horn. The Earles fork absorbed potholes like a champ and not even the deepest ones could unfaze this Bavarian beast. The ride quality was simply superb and whatever little jolts made it past the suspension were tackled by the solo sprung saddle.

If any current motorcycle manufacturer needed a good benchmark for the rider triangle of a touring bike, the R69 is still a forerunner in the list of bikes to be considered. The handlebar reach coupled with the footrest position and the location of the seat sum up to a motorcycle that could have been ridden for days. In short, the Triumph is the hooligan you’d take along for a pub brawl, while the BMW is what you would ride across continents on. Two very different takes on a twin-cylinder 30-something-bhp motorcycle. Whoever said engineering was boring obviously never rode motorcycles!

A big thanks to Vintage Zoroastrian Bikers Of Bombay for their lovely old machines.