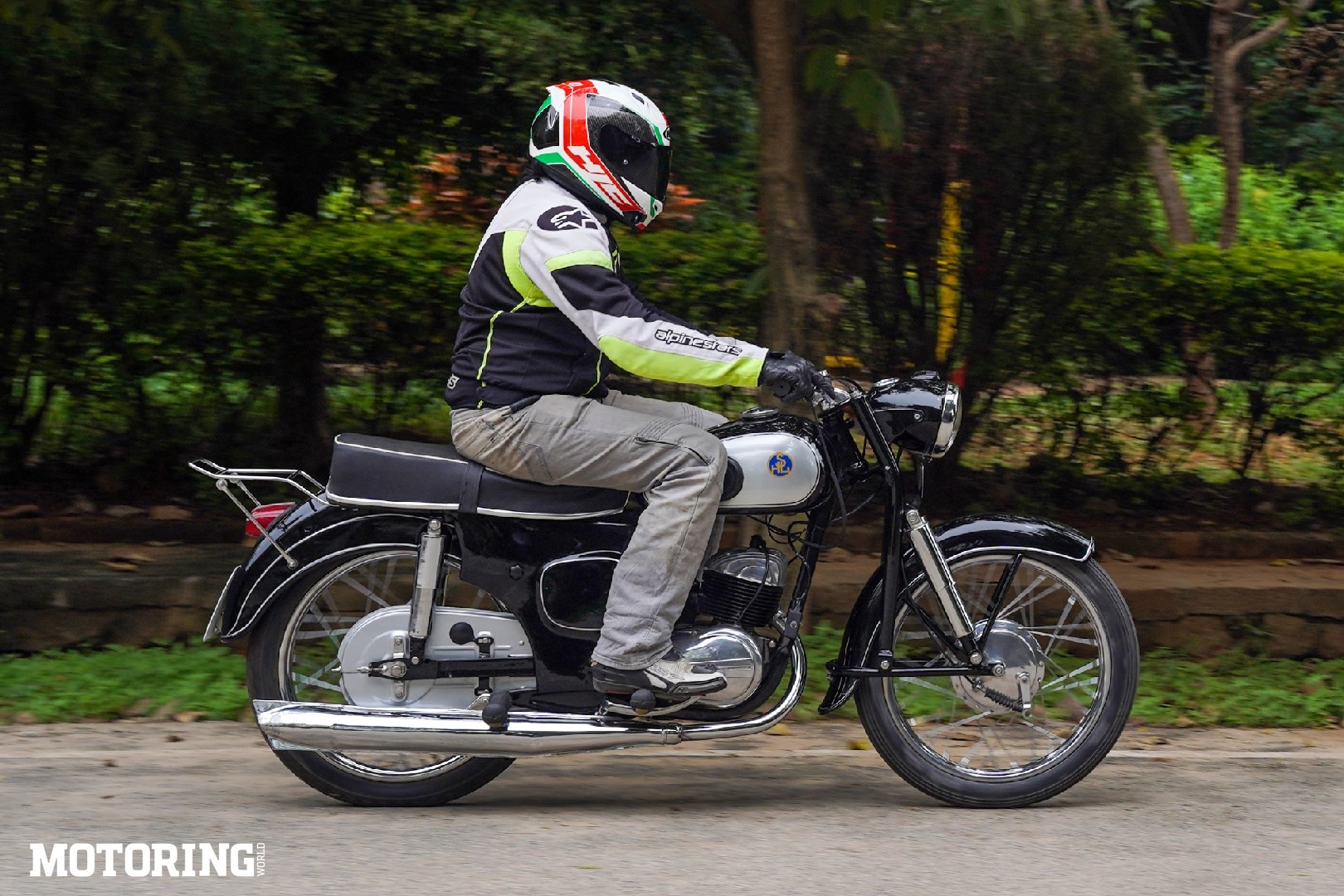 Let me begin with a confession — I don’t have much experience with classic motorcycles. That doesn’t mean I am not fascinated by them. In fact, in comparison to today’s electronic-heavy machines, all-mechanical classic motorcycles give me a proper kick. My garage does have a small set of motorcycles that belong to the early 1980 era, but what I am riding here is probably from the time my parents began going to school. The two-stroker here is a Polish-origin motorcycle that’s based on the German-made DKW RT 125. 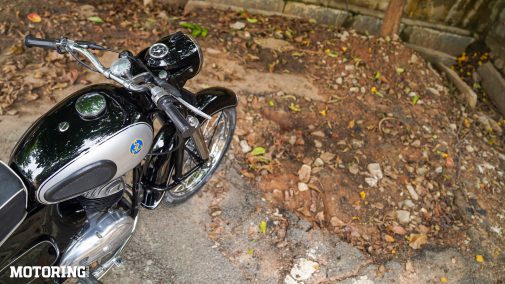 But first, some background information on why the DKW is so significant, and how important its role was in putting our nation on two wheels. After the end of WWII, pretty much the entire world was ticked off by Germany. As a sort of payback for all the damage the Nazis caused, the Soviet Union took the blueprints, tooling and machinery for the RT 125, along with many actual machines, and then produced copies of the motorcycle, which were called M1A Moskva and K-125 respectively. It wasn’t just the Soviets that made copies of the RT 125, but also the United Kingdom (with the BSA Bantam), the USA (with the Harley-Davidson Hummer), Yamaha (with the YA-1) and Poland — with the SHL M11 you see here. These were just the first examples of the many other derivatives that later came into existence from that one German motorcycle.

The importance of the SHL M11 in Indian two-wheeler history books can be linked with the Rajdoot 175, a motorcycle that never fully received the recognition it deserved. Besides the 175, Rajdoot also had a few other models like the GTS 175 (aka the ‘Bobby’) and Excel, which were also based on the motor from the SHL M11. While the original DKW RT 125 had a 125cc mill, SHL had developed a 150cc and later a 173cc version of the motor that was produced by Warszawska Fabryka Motocykli (WFM) — which explains the presence of the WFM logo on the engine covers.

As you may have guessed, the SHL M11 wasn’t a motorcycle that was designed to break land speed records — or records of any sort. It was instead a machine that had a very robust design, was simple in its construction, easy to maintain and fully mechanical, which meant it could be repaired and commissioned back into duty in any corner of the world. It was a motorcycle that would ensure you reached your destination, regardless of the time it took to get there.

Mounted on the chassis of the M11 is a 173cc two-stroke mill that made about 9 bhp when it rolled out of the factory in Warsaw, Poland. With all the years this bike has lived through, it’s safe to bet that it lost some of those horses — but they were found again after its complete restoration by Motomatic Restorations. Karan Lokhande is the man behind this M11, and has painstakingly brought it back to its former glory, bolt-by-bolt.

Since I own a Yezdi and a Jawa, it didn’t come as a surprise to find the kick starter on the left of the bike; it also functions as the gear changer. A small push inward, and the pedal sprung up and over to the back, ready to kick start the motor. I turned on the fuel, gave it two or three half throttle twists, pumped the kick starter a few times and then gave it a full swing. All that effort resulted in a muffled puff from the carburettor — nothing more.

Karan took over, and after just a couple of kicks, the M11’s motor came to life. The eastern coast of India was experiencing cyclonic weather, which is why the weather in Bengaluru was mostly damp and down by a few degrees. Wanting to fire it up on my own, I pulled up the key (located in the headlamp casing) to kill the engine and had another go at getting the German-derived motor to run. This time around, using the exact same procedure, the engine started up without any drama, soon idling out to a steady thump of 2T smoke from its chromed fishtail-fin exhaust.

I swung a leg over the bike and my hands easily found themselves on the grips. Motorcycles like the M11 and its cousins worldwide were designed for spending long hours in the saddle in great comfort. The riding triangle is upright and commuter-based, but notably stretched out, unlike modern commuters that feel mostly cramped to sit on. The seat has been recently re-bolstered with fresh cushioning, which meant I was assured of a comfortable ride. I say this not because the motorcycle had a poor suspension; it featured a leading-link fork at the front with twin hydraulic shock absorbers, and a springer-type suspension at the back.

This setup ensured I would have a cushy ride as I got ready to get going. I pulled in the clutch lever on the left grip, engaged the first cog of the 3-speed gearbox and the bike started to chug ahead, with little clutch slippage needed. As I began to go faster, I was soon in 3rd gear, cruising at the 45- 50 kph mark, covering ground with a steady stream of 2T smoke exiting from the tailpipe. The M11’s exhaust note has that typical 2-stroke sharpness, making passersby aware of your presence. That’s something modern 4-stroke machines sadly lack, with similar displacement engines and all manner of legislation having almost killed the melody of motorcycles, if you will. 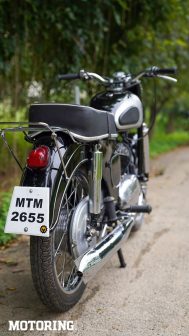 This specimen has seen a long life, and will soon surpass the 60-year milestone; after its recent new lease on life, it’ll possibly be around for another 60. I didn’t quite get the opportunity to open up the M11’s throttle, but any intention to change direction or ride over broken asphalt and the M11 took it all in its stride — which is one of the things it was designed to do. 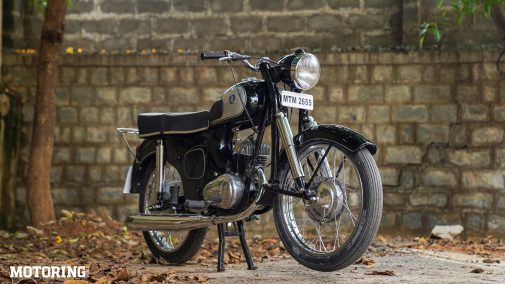 I was very tempted to exit the gated compound I was riding in and ride the M11 on the streets of Bengaluru, but the only reason I refrained from doing so was that it had started to become darker, as clouds carrying rain from the east coast began swooping in. Back at the garage, the SHL was quickly escorted to the front veranda of Karan’s home+garage, where it stood like a soldier ready to take on anything that would come its way; I can’t think of any other motorcycle that I’ve recently come across that has given me that vibe, and my brief stint on it has left me with an itch to get my hands on more old motorcycles, just to experience some simplicity in an increasingly complicated world.

We’d like to thank Karan Lokhande for letting us have a go on this lovely motorcycle.