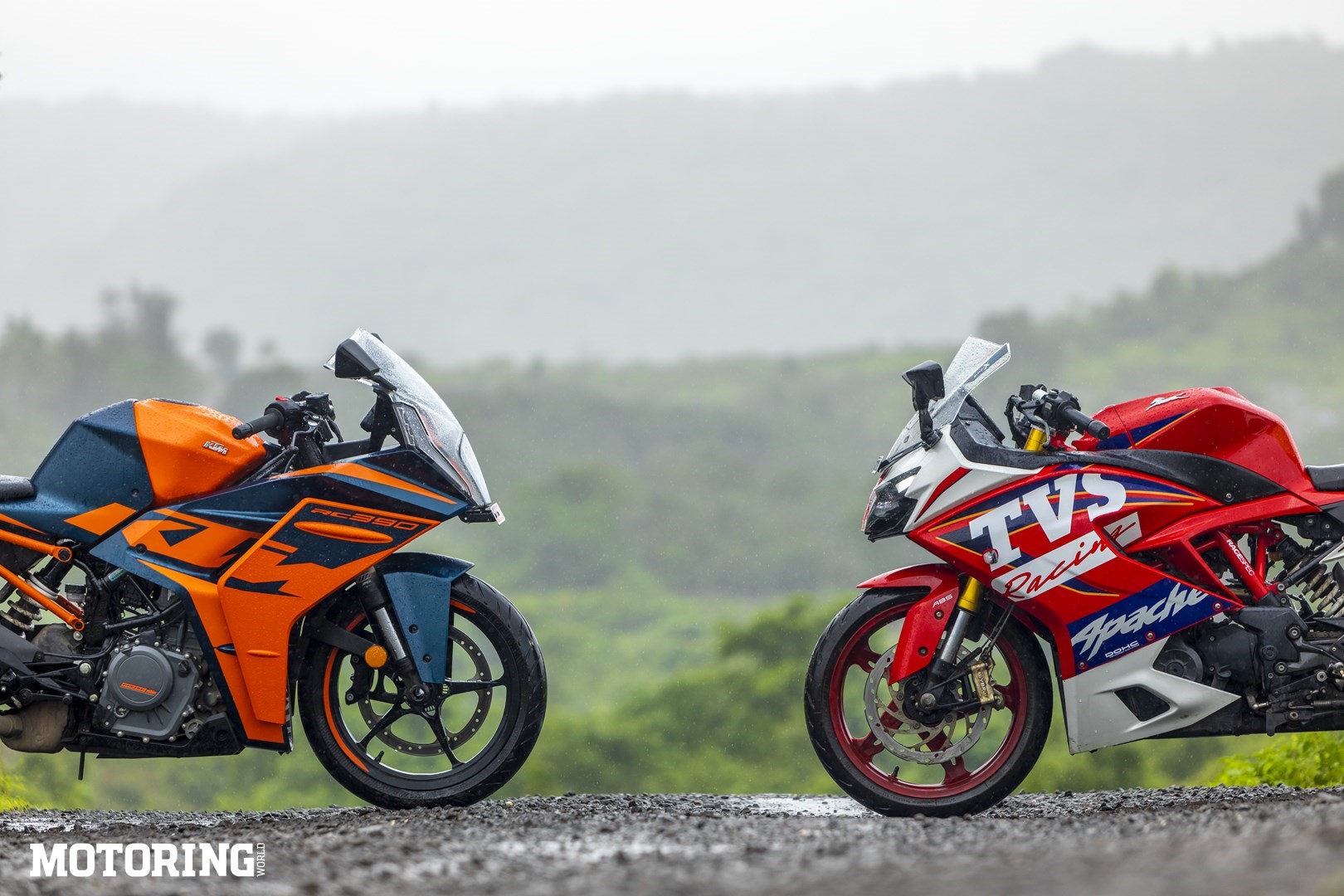 If I were to go back to the time when I had ridden these bikes for the first time, I would only be left disappointed after riding them. The KTM was so stiff and cumbersome to ride, that I was cursing the bike’s seat throughout the shoot. Truth be told, I sat on a rock after reaching the destination, which I found to be more comfortable than the RC’s seat. As for the TVS, I had high hopes for the RR 310 even before I had ridden it because it looks so damn good. I remember borrowing the long-term bike for the weekend from Huracán (ex-motoring now), but instead of riding it over the weekend, it only stood in my parking lot as I couldn’t wrap my head around the magnitude of vibrations and other hiccups it had. Seeing both the bikes together was a jump back into the past. But, isn’t that the case for everyone? We always strive to be a better version of ourselves with every passing day, right? We look back at the things we’ve done, analyse them and come up with a more mature and sound approach when revisiting the same things. Coming back to the motorcycles present here, it has been a similar story and both machines have vastly improved over the years to offer a better version of themselves. 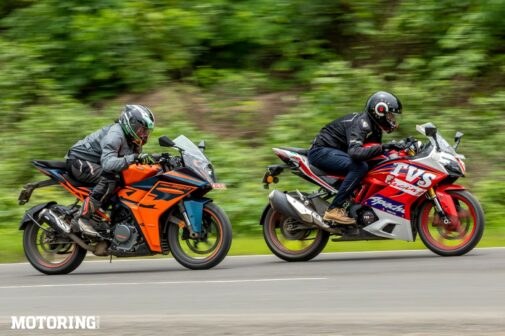 About the motorcycles here, the KTM RC 390 and the TVS Apache RR 310, you see them staring down at one another. They are nothing but wild brats, hooligans if I’d say. Ride them hard enough, and you’re in to experience motorcycling nirvana for a fraction of the price that bike bikes demand. So, without any further adieu, it is time to grab that popcorn and soda and watch them take on each other in this street fight.

LOOK AT ME!
If you had to give a hard look at the bikes, the KTM looks as if it has sweated it out at the gym and has returned with a nice lean and chiselled form. The RC 390 has ditched its twin-projector duck-faced design for something even uglier. There, I said it. I tried hard to love the design, but I guess it’s going to take some more time than I had expected. But, leaving the front headlight section aside, I like how KTM has packaged the motorcycle. Everything is compact yet exposed, giving it that proper supersport look. The Apache, on the other hand, has come back from a makeover at the tailor shop. While its design remains the same, the one here is the BTO (Built To Order) version that can be had in this tasteful livery. The colour scheme draws its inspiration from TVS’ factory racing team livery, which is a good thing. The motorcycle has enough decals to highlight the brand’s strong connection to its acing lineage.

KNOW WHO MY DADDY IS?
Oh, what a shame we couldn’t shoot in Delhi, else there would have been no need to answer this question. Anyway, both motorcycles come from influential families and it shows in the power they have over matters. Starting with the TVS, the Apache RR 310 has been around for five years now and packs exciting numbers to show — 32.52 bhp at 9700 rpm from the 312cc reverse-inclined liquid-cooled motor with a kerb weight of 174 kg. The KTM’s numbers are certainly higher, with its 373cc motor producing 42.90 bhp at 9000 rpm with a kerb weight of 172 kg. The RC 390 also ranks higher in torque figure at 3.77 kgm in comparison to 2.78 kgm from the RR 310. Over here, the KTM is the clear winner but also has a bigger displacing motor, so it’s a no-brainer here. 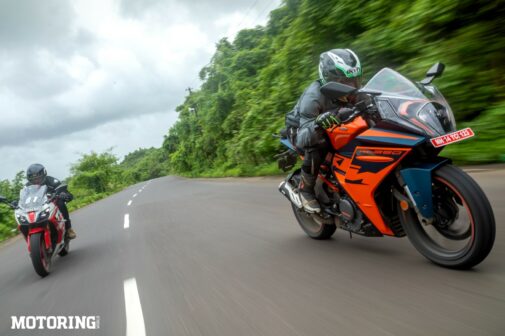 SEE YOU OUTSIDE!
Action speaks louder than words, which is why you are more likely to remember a fist fight than a verbal brawl. The only way to settle it between the two bikes is to take it to the street. To our luck, the sun was shining bright after a heavy downpour, which meant the roads were clean and had almost dried up. Keshav and I raced up a set of twisties, taking tighter lines and more speed with every run. Given the power advantage, the KTM stayed ahead of the Apache for most of the time. Around the corners, both bikes offer immense levels of confidence to lean in hard. While one sits on the bike with the RC 390, with the RR 310 the rider sits more inside the bike. This permits a more aggressive lean on the TVS, but KTM feels a tad bit more confident allowing you to carry more speed mid-corner.

To compensate for the lesser power, the Apache has to work hard here. While the extra grunt is as noticeable as it is enjoyable, the RR 310 does get a viby towards the redline. The previous generation RC 390 was prone to this issue but is absent with the latest iteration. That said, both motorcycles are proper fast. Either bike will show you the good side of 150 kph on the speedo, but it’s the KTM that does it slightly quicker.

TURN IT UP
The curves! Isn’t that what we all are attracted to regardless of age? Well, at least if you belonged to the less fair of the sexes. Out here, aggression is pointless if the rest of the motorcycle isn’t up for ridiculously quick changes in direction. And, truth be told, it was a tough one between the two bikes. The RR 310, one with a longer wheelbase, requires a bit of planning before entering a corner. The bike is best ridden hanging off it while keeping the bike less leaned. Look where you want to go and the RR 310 will take you there, faster than you’d have imagined. However, if God has been generous while endowing your proportions, you will find the Apache a bit cramped.

The RC 390 feels more of a seasoned athlete in this context. The seating area is spacious and roomy, allowing the rider to shift around the seat. The bike is very predictable most of the time and is fun to ride really recklessly. The main cycle parts like the swingarm, suspension and brakes are of premium spec and have been set up beautifully for road use. The suspension is stiffer than the two, but the much better-cushioned seat makes the ride more pliable. 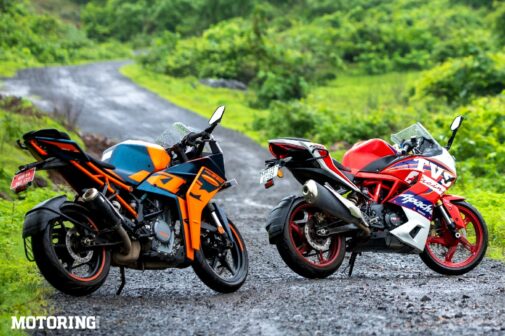 KNOCKOUT PUNCH
In the game of motorcycling adolescence, being the best is important, but not everything. The RC 390 and the RR 310 both have evolved to become better versions of themselves. They are faster, more agile and feature-packed in their respective ways. The RR 310 is a great bike, and the BTO version here is customisable with the option to have adjustable suspension and is equipped with riding modes. The RC 390 was already a track-focused motorcycle that has now been further improved with cornering ABS and traction control with a conscious thought toward livability, which is now present. That said, it all comes down to the matter of how much one is willing to shell out for the kind of performance. In my opinion, the RR 310 is for those who aren’t looking for very serious performance and prefer a more balanced experience of sportiness and ease of daily riding. The RC 390, on the other hand, is a motorcycle that was and still is a machine that’s on steroids. You cannot ride it relaxed even if you wanted to. It wants you to treat every ride as a time attack, which although fun-packed, can get a bit exhausting for some.