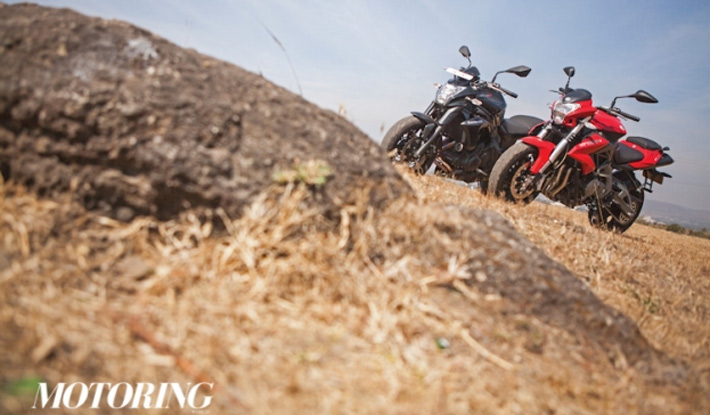 When Kartik and I first met, we looked like twins. We had the same hairstyle, the same spectacles, the same dress sense and even the same model of phone! Since then, though, I’ve ‘grown’ a lot more. I’m trusted to help move anything heavy (hey, it’s a question of percentages), while Kartik can be relied upon if you want to have fun. Like the Benelli TNT 600 and Kawasaki ER-6n, in fact. They belong to the same category, will cater to the same consumer and, most importantly, cost approximately the same. Which one should you put your hard-earned green on?

Looks
Both motorcycles follow the ‘less is more’ philosophy. As naked streetbikes, you’re treated to a headlamp, a tank, and side panels. The Benelli is the more traditional of the two, with a headlamp unit that takes a few design cues from the TNT but not copying it exactly. The tank is large and wide, and the scarlet bits on the motorcycle contrast nicely with the matte black ones. The Benelli scores points for the upside-down front forks which, besides being better than traditional forks, also look very good; the swingarm, which looks like it was designed for a supersport machine, and those nearly-oval-but-triangular underseat exhaust tips, which look like nothing else on the road. The enthusiasts will also notice the four downpipes and the wider rear tyre on the Benelli; the Kawasaki is quite short-handed in the exotic-looking bits category, although it does have its own brutish charm. The TNT 600 looks startlingly like the Japanese motorcycle in black, which makes me wonder if there’s a template they’re all following.

The Kawasaki in black is almost lost in a crowd, but the quality of things like switchgear is a cut above the Benelli’s. It also has traditional front forks and a standard frame to the TNT’s upside-down forks and semi-trellis frame. Both motorcycles trade punches in the brake-systems department, the Italian opting for radially mounted callipers, while the Kawasaki hits back with petal discs. Overall, the Benelli aims for Italian flair but doesn’t quite succeed. The ER-6n apes its elder Z siblings very successfully, that sloping forehead and hunchback hinting at primal brutality.

Engine and gearbox
The Italian, first. The four-cylinder motor has a DOHC valvetrain and makes 81 bhp at a stratospheric 11,500 rpm and 5.3 kgm at 10,500 rpm in the international market, so we expect this figure to drop slightly for the Indian market. This translates to a docile motorcycle at low revs, with sharpening throttle responses as the revs rise. To ride this one quick, you’ll need to have a good right wrist and more than a little patience, because there’s no instant hit of torque. In fact, that powerband is so high in the rev range, it induces a little head-scratching because the power peak is 500 rpm beyond the redline indicated on the tachometer. Revving this isn’t much of a bother, because the engine is smoother than a baby’s bottom all the way to the limiter. The howl that emanates from those underseat tailpipes is so loud, most owners will not want to upgrade to an aftermarket exhaust. The 6-speed gearbox is positive, but the clutch lever is a little heavy to operate.

The Japanese motorcycle employs a little bit of ninjitsu even though it doesn’t carry the relevant moniker — twist the right wrist in any gear at any speed, and it will teleport ten metres down the road. Give it a handful in the first two or three gears, and you run the risk of hoicking the front wheel. Peak power of 71 bhp is achieved at 8500 rpm, and peak torque of 6.5 kgm is available at 7000 rpm. The redline is similar to the TNT’s at 11,000 rpm. It doesn’t have the evocative noise of the Benelli, but has a more down-to-business, softer chainsaw buzz that is nevertheless loud enough at high revs. The engine feels a lot quicker to respond in any gear, the clutch action takes half the effort of the TNT, and the gears engage with less effort but with no less feedback.

Performance
Surprisingly, the kerb weight figures differ by only 4 kg, the ER weighing in at 204 kg and the TNT at 208 kg, making their power-to-weight figures very similar. However, the perception of speed is very different on the two motorcycles, the Benelli responding better to the open road and sportsbike-like inputs, whereas the Kawasaki just wants to go everywhere in a tearing hurry, whether it’s to the shop for milk or on a 1000-km tour. That’s mostly down to the accessible torque curve, which makes it so much easier to attain better acceleration and roll-on times. If this were a faired motorcycle comparison, we’d hem and haw our way to the one we like, but for a naked motorcycle whose use is primarily in the city, the lack of good amounts of torque at low revs hurts the Benelli.

Handling
The Benelli exhibits better chassis and suspension parts in the form of upside-down front forks, radially-mounted front brake callipers and an aluminium-alloy swingarm. The Kawasaki has superior brake discs. Both use an offset rear shock with adjustable preload, and neither offers ABS or traction control. Here, too, just like the engine, the two feel very different. The TNT feels wide, and the reach to the ‘bars is longer. The ER sits you on a narrow frame with a handlebar so close, you’re virtually upright. As a result, the Kawasaki feels easier to manoeuvre in the city, but the Benelli doesn’t feel any more planted than the other around a corner. Both are sprung for comfort rather than knee-downs (not that Ruman doesn’t do those anyway), but the Kawasaki inspires a lot more confidence in the rider. Worth mentioning are the Benelli’s brakes: despite being radially mounted, they don’t offer the kind of feel and feedback that the petal rotors on the ER-6n’s do. The narrower rear tyre of the Kawasaki also helps it lean over quicker, and, in short, the Jap is simply more confidence-inspiring and therefore, fun.

Verdict
Aside their most un-evocative names, there’s really nothing not to like about either motorcycle if you’re approaching them from the lower segments. To the rider who wants the hooligan that a 600cc naked should be, look no further than the Kwacker. Everyone who wants the ‘big bike’ sound at reasonable prices, you should know that the TNT is priced very similarly to the ER, which is quite the deal for two extra cylinders. As for Kartik and I, despite the wide difference in our current kerb weights, we can’t help but dream about riding off into the sunset on the Kawasaki… on one wheel.