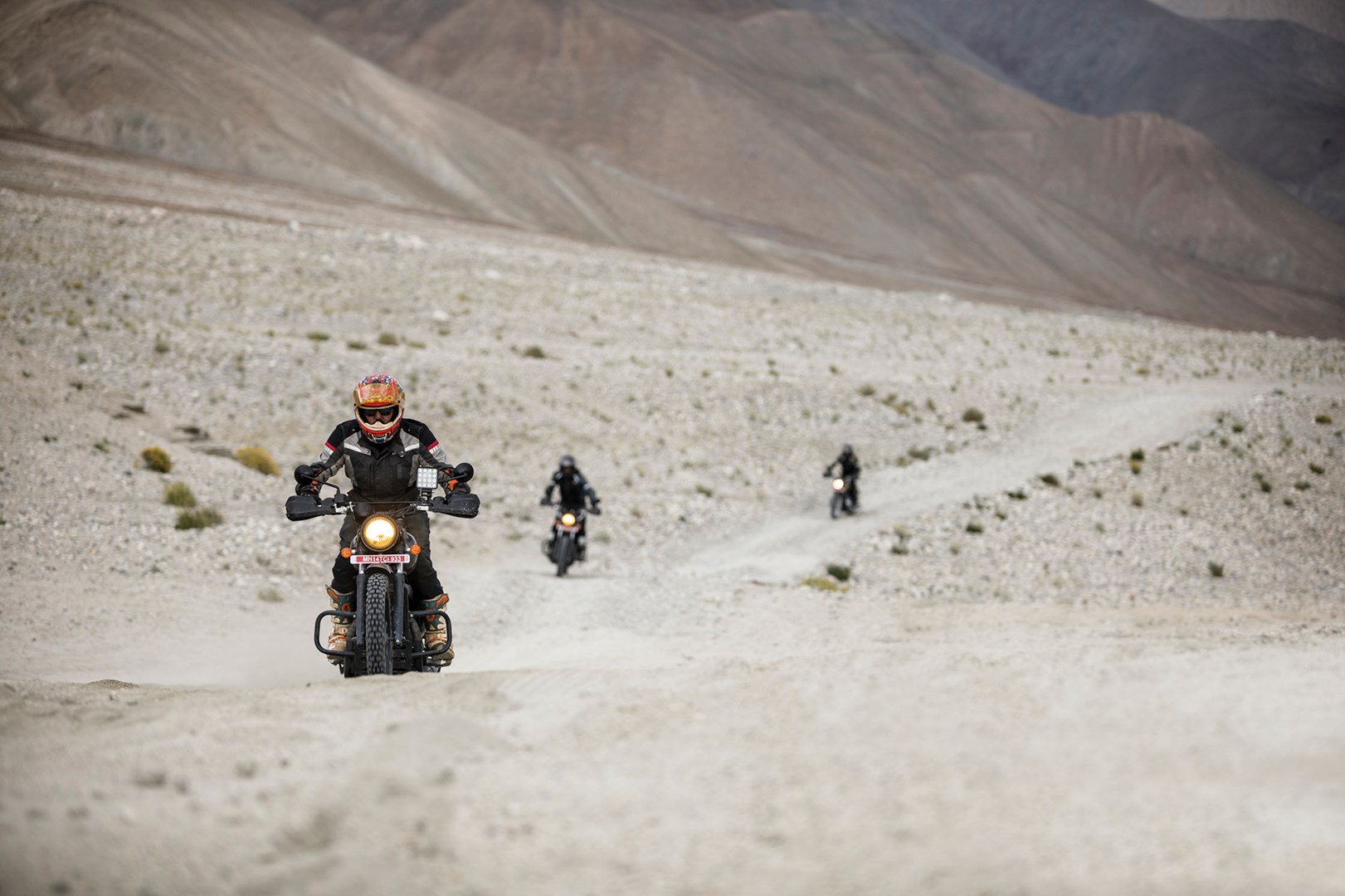 We were on our way to Tso Moriri from Hanle. It was a very fast trail with hard-packed dirt stretching for about 150 km, ideal to stand on the ’pegs and ride with liberal use of the right wrist. It was actually my second run on this same route within a span of two weeks. Earlier, I was here on a mid-segment adventure motorcycle riding exactly the same path. This time, though, I was riding an eloquently designed street bike that pays homage to its predecessors, the Jawa 42, with a lower ground clearance than an adventure bike and a setup designed mainly for comfortable road riding.

But somehow, the bike constantly kept egging me on to give it all I’ve got. And so I did. Slotted in fifth, we were clocking about 115 kph along the hard-packed trail that opens up to the scenic Tso Moriri lake. This was the last leg of the Jawa Nomads Ibex Trail 2019 ride that was flagged off from Leh about a week ago. Over the past seven days, I’d exchanged multiple Jawas that were allotted to the media folk, from the classic Jawa Jawa to the Jawa 42 to the Bombay Customs-built Jawa 42 scrambler which totally blew me away. I shall explain why a bit later. 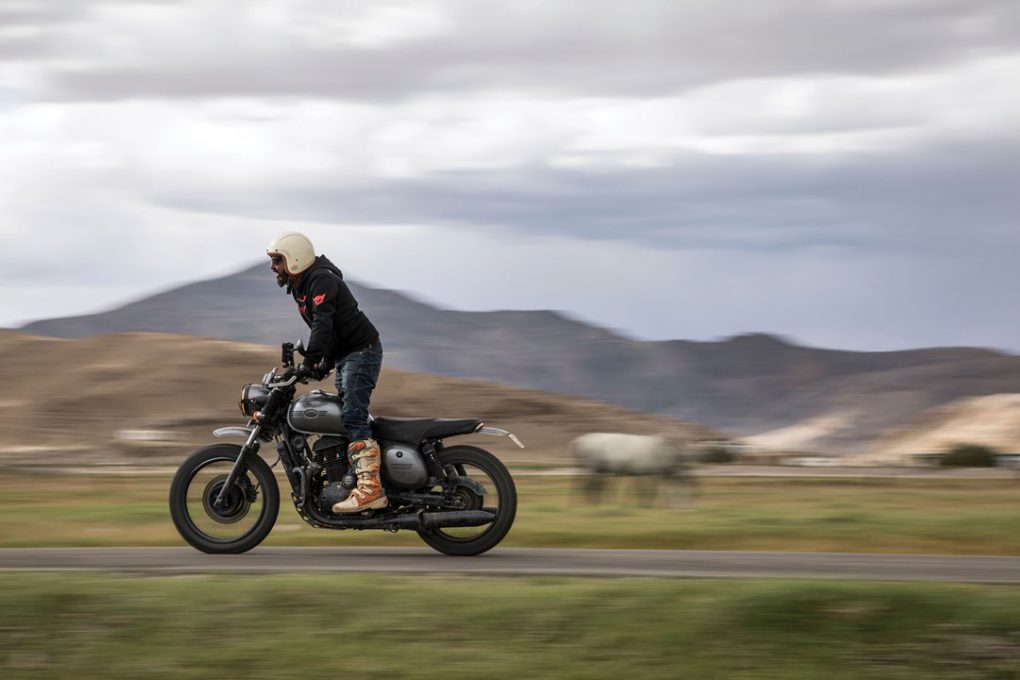 One thing these bikes had in common was their simplicity and bare-wheels character — a truly endearing characteristic. No tall claims of performance numbers or overhyped technology outlined in a 107-page marketing brochures. No single-purpose objectives to be achieved. Just basic but functional apparatus that brewed a heady concoction of motorcycle freedom laced with the aroma of adventure and new experiences. 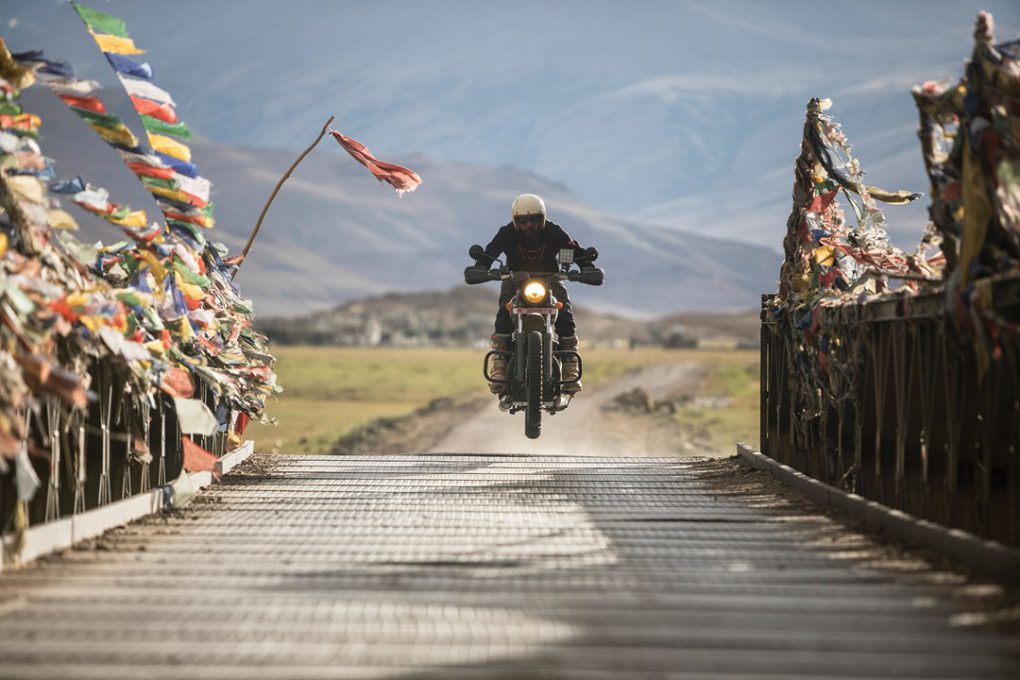 Leh to Sumur
We began the ride from Stok village which lies on the other side of the Leh main town, residing right under the nose of the famed Stok Kangri peak. Next on the route was the Mecca of motorcycling, the scenic but now over-populated, Khardung La. The majority of us on this ride had been to Khardung La on several occasions on all kinds of wheels, but this time had more historical importance than ever before as for the very first time we were riding the new-generation Jawa motorcycles to the highest motorable pass in the world, on the first-ever Jawa Ibex Trail ride, at that. We only realised all of this when we reached atop the pass and stood there for the customary photograph.

That being ticked off the checklist, we proceeded onto Sumur in Nubra valley for the night’s halt. The first day was easy on us and the bikes, thanks to gorgeous tarmac laid down by Border Roads Organisation all the way to Nubra. We ended the day with some lovely barbeque, campfire and music. How all riding days should ideally end.

Sumur to Merak
Leaving from Sumur, the real Ladakhi terrain greeted us. Plenty of deep water crossings and countless dirt trails to ride, away from the main broken tarmac stretch. And no matter which of the paths one chose, they all eventually met ahead in the distance as one. This allowed our pack of about 30-odd motorcycles to spread apart and ride which, in my opinion, was great as most of us scrambled away on our chosen trails like kids leaving from school for their summer vacations.

At some point, we waded through certain water crossings repeatedly to give the filming crew the right shots. Soaked till the bone yet shivering under the harsh sun, we found ourselves tired at some point, but the Jawas continued to prod us on. Riding along the cusp of sparkling blue waters of the majestic Pangong Tso lake, we arrived in Merak just short of the sunset. Hurriedly, everyone rushed to the lakeside for that Instagram-wrecking photo-op.

Back at the campsite, everyone gathered around to hear stories of the Kargil War from Mahavir Chakra awardee Colonel Sonam Wangchuk of the Ladakh Scouts regiment. He was presented a special-edition Jawa motorcycle in honour of his service to the country. The Lion of Ladakh, as he is fondly referred to, rode with us throughout the ride and shared his on-duty stories as we passed important places along the way.

Merak to Hanle
The most anticipated destination on the Jawa Ibex Trail 2019 was Hanle. Home to the Indian Astronomical Observatory and the iconic Hanle Gompa, everyone eagerly awaited for the famed night sky of Hanle to open the curtains and unfold its magic. Soon, it fell dark and the town switched off its lights at 11pm (a regular practice there); everyone stepped out with our motorcycles and cameras, and headed to capture the Milky Way in all its glory.

Most of us shot well into the wee hours, waiting for the perfect photo, since the next day was to rest in Hanle. But the eager bunch, including me and our shutterbug Kaizad, marched away again early in the morning to explore the terrain and find some unseen trails. We found one such trail which apparently touched one of the last checkpoints on the Indo-China border just about 10 km ahead.

We didn’t want to deal with crosshairs and jail time, so we withdrew the idea of exploring it and shot at a relatively safer mining trail on the other side of the same hill. We can be brave sometimes, but we never go full monty. Even if the pictures suggest otherwise. With two fantastic days spent in Hanle riding, filming and exploring the untouched landscape, it was time for us to start the journey back home. 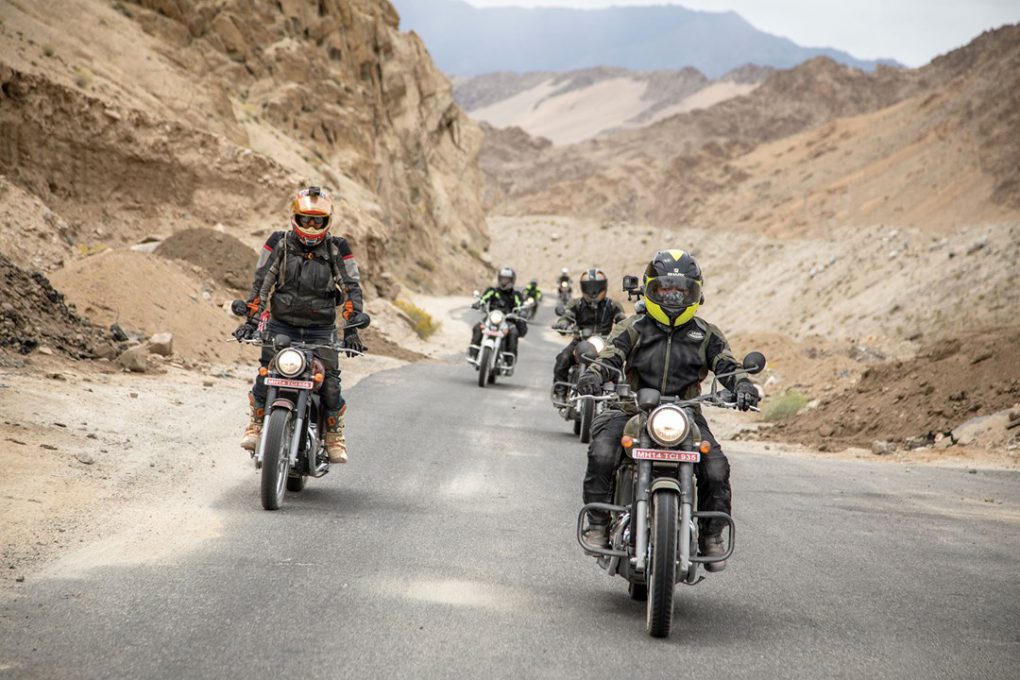 Hanle to Tso Moriri
This was the fastest dirt stretch on the entire route and I was pretty certain that after the past few days of abuse, this was where the Jawas would, in all probability, expose their Achilles heels. And especially my bike because from Merak onwards, I was glued to the Bombay Customs Jawa 42 Scrambler and tried everything I could to see where or when it would give up. But nah. 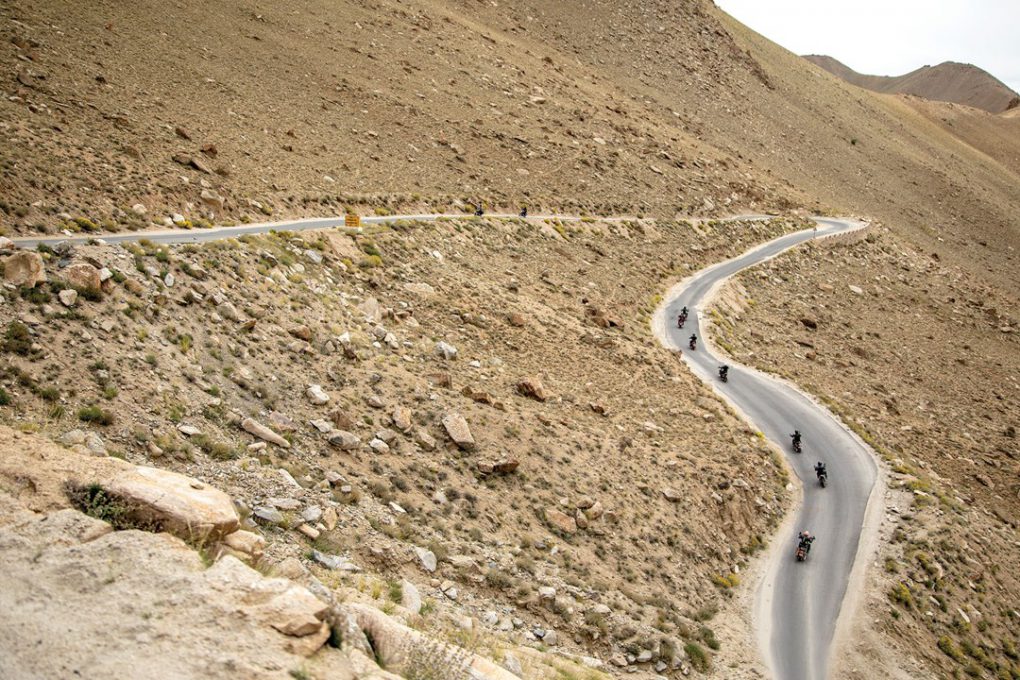 We reached Tso Moriri, filmed there going over some really nasty patches of hard rock and steep inclines, gathering even more altitude than we were advised to. Nothing could break the Jawa’s spirit and we continued towards our last day back to Leh. 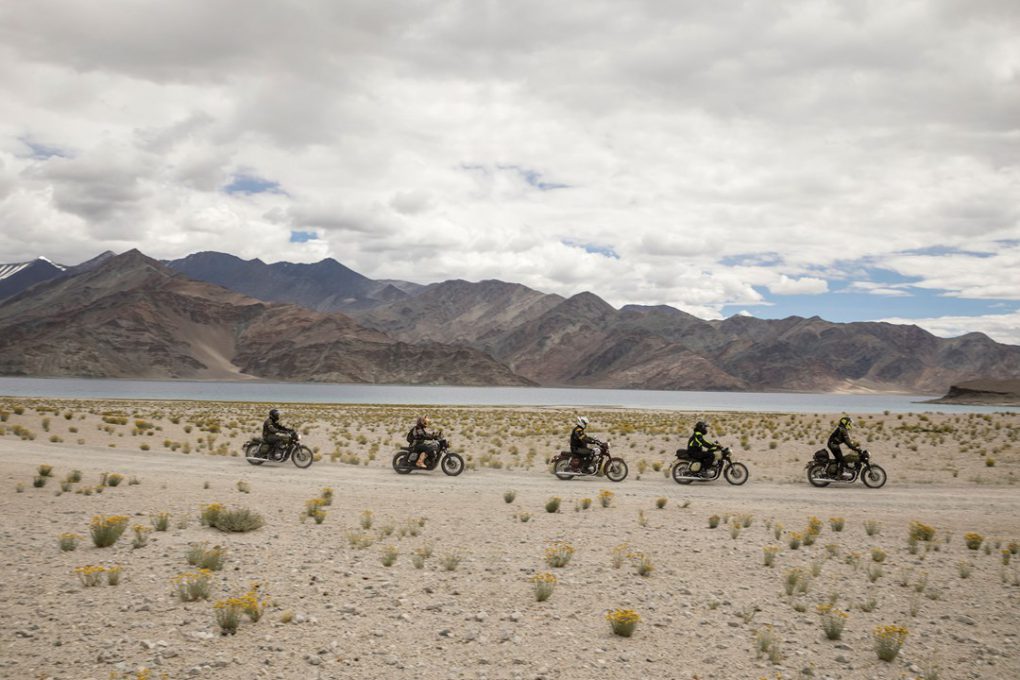 Tso Moriri to Leh
Here on, it was the race-track-grade smooth tarmac snaking through the majestic Himalayas passing over the beautiful Tanglang La and going down to the busy Upshi junction before taking us back to Stok.

Parked for the day after a week of just riding motorcycles for the joy of adventure and exploring, we all retired with grins wider than our helmet visors. And the realisation that all the Jawas delightfully lapped up all the torture we served them so relentlessly was a common talking point amongst us all.

The Jawa Nomads Ibex Trail 2019 was a first-of-its-kind initiative by Jawa Motorcycles and it promises to brew many more of these memorable experiences for the Jawa family. We can’t wait to see where these nomads go on and with their motorcycles.