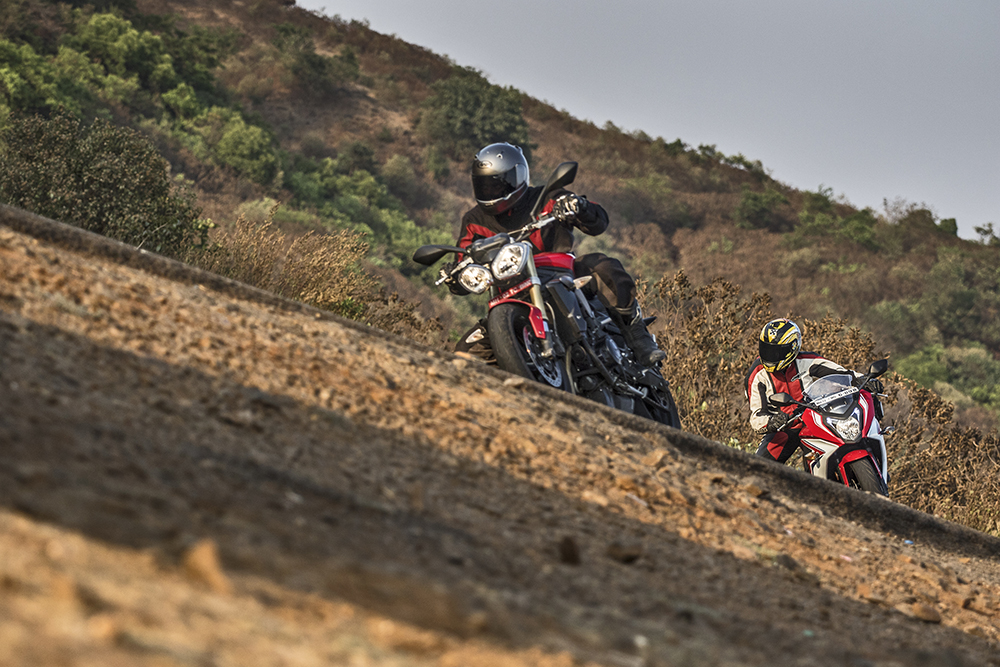 An inch away from my elbow is Raunak astride the Honda CBR 650F. We’re both going absolutely flat out, me crouching to the best of my ability on the Triumph Street Triple. The temptation to nudge him is too strong, but that might mean having to restart from the back of the grid. There’s only one way to keep it fair – pin it and hope for the best. Give it all we’ve got and brake very, very late. It’s a game of chicken, really. Welcome to the world of middleweight motorcycles. Welcome to unadulterated speed.

WAIT, WHY THESE TWO?

It’s a comparison you just can’t escape if you’ve found a bagful of cash and an urge to blow it up before you’re found out. Nearly identical in displacement and power outputs, the CBR and Street have co-existed rather amicably, but we like stirring up a fight every now and then, so there! Nearly a lakh of rupees separate these two terrific motorcycles, but on every other count they’re neck and neck. Is the Honda really worth saving those precious thousands, then? Or is the Triumph a bit unnecessarily exotic? We know of only one way to find out.

You’ve seen the CBR on these pages before and so, you probably already know what it’s all about. It’s faired, extremely friendly and capable and, more importantly, a fantastic performance machine that’s more superbike than sports-tourer. It reminds us of them late ’90s supersport machines – meaty, not anorexic and addictive once you’ve learned the ropes. Let its sporty riding geometry not fool you – it’s good enough even for a spot of mild trail riding.

The Street Triple is making its Motoring World debut here, so I’ll be quick to mention that it’s one of the most popular middleweight naked streetfighters in the world. Not without reason, too, since it’s light, extremely agile and does full justice to its streetfighter genes on every count. On it, you sit relatively upright, the slim bodywork camouflaging its potential, but you get a sense of full control. And this is even before you’ve begun riding it! The Street is the visual underdog here as compared to the CBR’s race-ready bodywork, but in the holy book of middleweights, power-to-weight ratios are fundamental, isn’t it?

It’s East versus West. Japan versus the United Kingdom. This is no street-side brawl; we’re talking about a war between developed nations here. Numbers, therefore, are important and we’ll start with the CBR. A liquid-cooled, inline-four-cylinder motor displacing 648.7cc is housed within the steel diamond type frame of the CBR and it produces a very impressive 85.2 bhp at a fairly intense 11,000 rpm. Torque is plentiful, too – 6.2 kgm at 8000 rpm – and sending all that grunt to the tarmac is a super-slick 6-speed gearbox. Fuel delivery is the responsibility of Honda’s commendable PGM-FI unit, so you know you’re in for a butter-smooth riding experience at all times.

The Street Triple is fuel-injected, too, but it employs a triple-cylinder, 12-valve motor. With a displacement of 675cc and a power output of 78.2 bhp which comes in at 11,054 rpm, the Street Triple is exactly seven horsepower down on the CBR. Crucial, but then it runs a higher compression engine and is lighter by over 20 kg, which translates to a lot more grunt and aggression. The Street’s triple motor generates 5.8 kgm at 8375 rpm and thankfully, in a deviation from an increasingly European pattern, it still employs a wet clutch. Transmission is a 6-speed affair and while the shifts are good, they’re not as slick as the CBR’s.

The CBR has the advantage on power and torque, although its additional cylinder and lower compression ratio make it less engaging but also less stressed. The howl from its inline-four motor is bassy and sweet, but not scary unless you’re nudging the peaks of its rev range. Right from the start line, the CBR feels linear, progressive and smooth and very often, you end up doing speeds higher than you’d intended, thanks to all that refinement on offer. From standstill to 100 kph takes a shade under 4 seconds – that’s bloody quick, right? – and at that speed in top gear, the engine’s barely awake, spinning at 4500 rpm. Light work for the Honda!

The Street Triple is the more dramatic of the two. Its inimitable triple-cylinder howl is more aggressive than the CBR’s right from idle and there is a ferocity to the throttle twist grip’s response that immediately gets you to sit up and notice. It’s true that the Street sources its motor from the razor-sharp Daytona 675 (albeit in a relatively subdued state of tune) and that says a lot about its credentials. Off the line, the Street is a quick, if not quicker, than the CBR to 100 kph, but at that speed, it’s engine sits at a neat 5000 rpm – 500 revs more than the CBR – and this pattern remains through every significant step on the speedometer.

In the real world, the all-out performance of either motorcycle is ridiculously identical. While the Street is more engaging, the CBR’s effortlessness undermines its potential in terms of feel. The CBR’s decidedly sportier format, however, does its performance huge favours, as you attack corner after corner, going hard through the gearbox. Good use of the throttle will even get the front wheel floating off the tarmac by a few inches and that gets really addictive, a few minutes into riding it. The CBR is really easy to ride smoothly and even if you don’t, the overall package is so forgiving, you’ll look like Jorge Lorenzo even after your best attempts to emulate Marc Marquez’ riding style.

The Street Triple’s streetfighter format does involve having to use a bit more muscle, but its light weight and resultant flickability make it very approachable as well. You need more courage to push the Street flat out, since the front wheel nearly always threatens to lift off, only settling down past the 150-kph mark. Either motorcycle will take you well beyond 200 kph, mind you, but the Street’s naked design and more vocal motor amplifies the sensation of speed. You need to be more of an expert in self-restraint if you want to go really fast on the Street and, if successful at it, you do stand to give the CBR a tough time up your favourite set of twisties.

Agility is one of the strongest reasons behind the invention of middleweight motorcycles and, understandably, this is the juiciest bone of contention between the CBR and the Street. The latter has the upper hand here – on paper, at least – since it features an aluminium beam twin-spar chassis, a USD fork and weighs 168 kg dry (kerb weight figures undisclosed). The CBR’s frame is made out of steel, its fork is a conventional telescopic unit and it weighs 215 kg – a definite disadvantage, then. Unsurprisingly, both motorcycles run the same tyre sizes – 120/70 R17 at the front and a 180/55 R17 at the rear – and hereon, the tables do turn a wee bit.

The CBR, despite its mass and lack of exotic cycle parts, is a faired, clip-on handlebar-ed setup, which means it’s more of a natural when it comes to high-speed, racetrack-style cornering. Personal preferences aside, it definitely is a touch easier to stay committed on the CBR than on the Street although the latter is far more willing when it comes to frantic changes in direction. The CBR does make you work harder, but it is ultimately a wee bit more rewarding, especially if you have a MotoGP race playing in your head every time you ride a motorcycle. The CBR also has the larger brakes of the two up-front (two 320 mm discs; the Street gets 310s and ABS is standard and disengageable on both) and thanks to the riding position, weight transfer happens more predictably on it. To sum it up, the Street is definitely the better of the two in terms of real world, more righteous speeds but if you really want a superbike for half the price, the CBR is the one.

As far as comparisons go, this has been a really tough one and I’m sure you’ll agree. I’ve rarely experienced two motorcycles breathing down each other’s necks with this much intensity outside of television and to think that you and I can go out there and buy these machines right away is as delicious as it is scary. The reality, however, is that while the CBR 650F and Street Triple are evenly matched, it takes two very different and very aware riders to make the right choice. The Street’s juvenile mannerisms take a more skilled, more mature rider, while the CBR’s forgiving, enveloping performance does make it a reassuring upgrade even coming from the 250cc fold.

With its Rs 7.60 lakh price tag, the CBR is extremely good value and while Rs 80,000 more will get you the Street Triple and therefore better cycle parts, it also demands more responsibility and caution. So there you are! Reserve the elbow nudges for another day and welcome to the world of unadulterated speed.