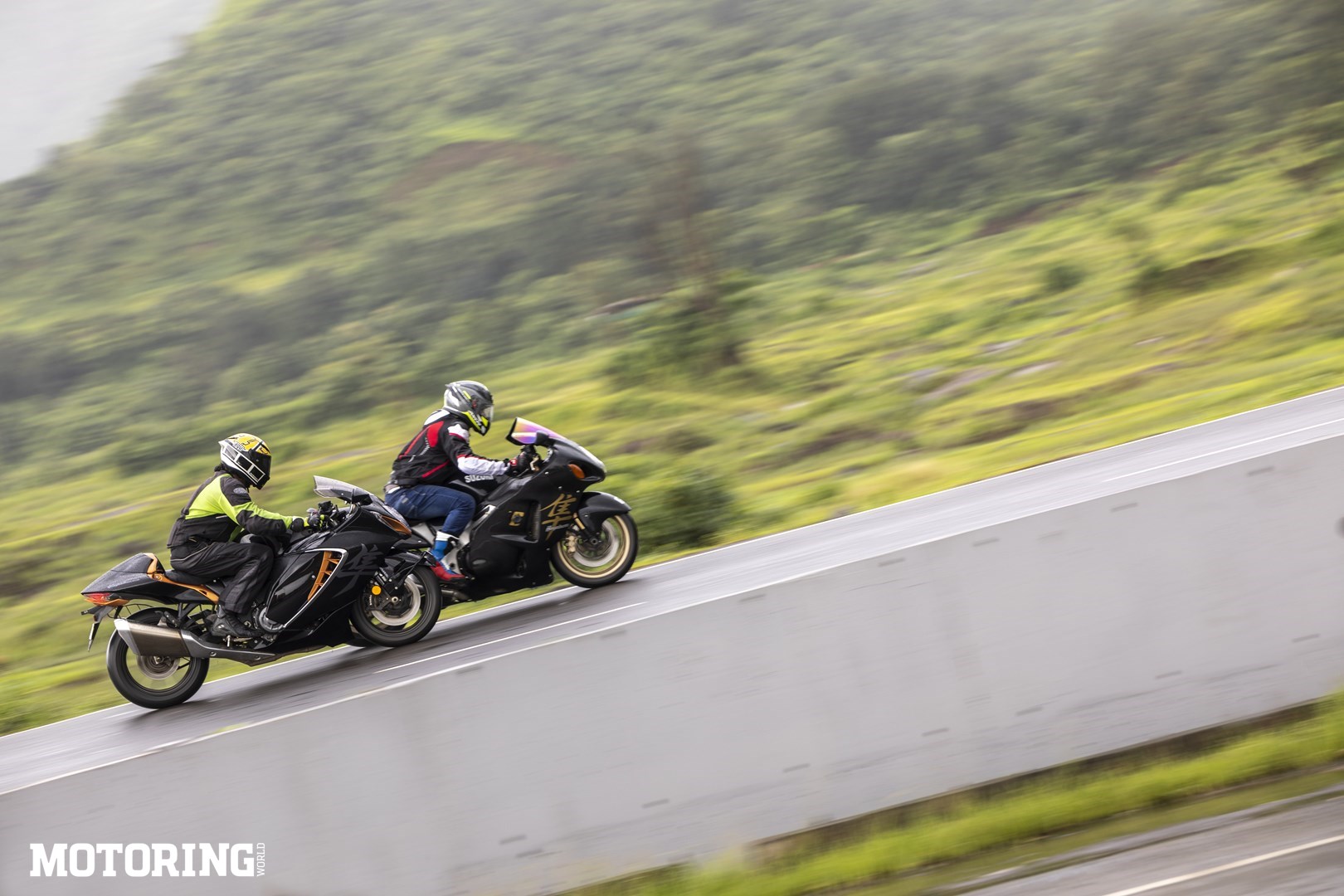 It takes quite a motorcycle to force fiercely competitive manufacturers to stop printing ever-higher numbers on their speedometers. And till date, I’m not certain whether it was the Suzuki Hayabusa’s nuclear-grade inline-four that did that or simply the way it looked. In 1999, the Hayabusa was a wind-tunnel-sculpted uppercut to the brain, always followed by a body blow to the gut thanks to the 173 bhp produced inside its bulbous shape. Other motorcycles and riders alike had no choice but to be floored. There wasn’t, isn’t and likely won’t be another bike like the Hayabusa. To no one’s great surprise, except perhaps its rivals, the giant Suzuki rightfully took its place as one of the greatest motorcycles of all time the moment it hit the road 22 years ago. 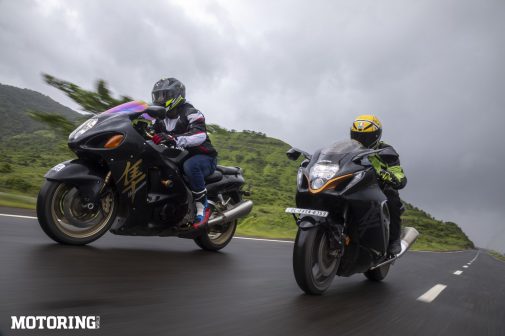 I could stop writing right now because people around the world have probably said everything there is to say about the Hayabusa. However, I couldn’t resist the chance of putting the latest Hayabusa — and the best one yet — against the original scrotum tester. A few phone calls and messages pointed this old Hayabusa at the new one on a super-wet morning, piloted by owner Rohit Bhandari, a 31-year-old martial arts instructor. Now that’s one heck of a package, eh? The first-gen Hayabusa was Bhandari’s dream bike forever, and he bought this used specimen from 2005 in June 2021. Even the lack of official sales and service didn’t stop the Hayabusa from swooping down on Indian roads all those years ago.

Of course, as could be expected from a 16-year-old superbike, Bhandari’s black and gold ’Busa was not stock; it’s been repainted, has unusually large ‘Suzuki’ decals on the tank, lovely aftermarket loud pipes, and other bits and bobs. Next to the new one, it looked every bit the stately ancestor that it is, and I realised it wasn’t a mistake to leave the second-gen out of this meeting. Of the three chapters that make up the Hayabusa story, the first and the latest will eventually become the ones we want to read the most. Also, is it just me or does the ’Busa always look best with a bit of bling on it? Perhaps all those custom guys have always been on to something.

Between these two, many a ’Busa has left its mark on me. It was the first big-bike story I wrote when I joined Motoring; I still remember that life-changing week spent on highways and B-roads, looking for every opportunity to open that throttle wide. There were a couple of second-gens I rode in Bangalore, with ridiculous 330-section rear tyres and drag-racing swingarms; they were near-200-bhp pendulums, with masses of rear rubber that took about a week to warm up. And then there was the fully blown first-genner built by Mantra Racing; on an empty runway, its speedometer needle pointed at the very last number — 340 kph — and ended my velocity-chasing career forever. Since then, I’ve been unconcerned with top speed. Surely, nothing gets faster than that. Hopefully.

By the way, the Hayabusa only had 340-kph speedometers for the first two years of its first life. From 2001 onwards, the last number on its meters was 280, leaving a respectful blank space where 300 should have been. The new one takes a step closer to the magic number, reading till 290, but still leaves 300 out. It’s limited to 299 anyway, though I’d need another runway to verify that. On our rainy day out in the real world, though, top speeds were as academic as they tend to be. What I really wanted, even after two days spent on the new one, was to ride the first-gen — because, after all these years, I hadn’t ridden a stock one yet! And it wasn’t for lack of trying, I assure you.

As I should’ve expected, the old ’Busa had a really old-school superbike feel to it. Nothing by way of rider aids, not even ABS (!!), on a 300-kph motorcycle? Those were the days, indeed. I, for one, have firmly converted to wanting every bit of safety tech on fast bikes. Then again, this was the Hayabusa I was riding, famed not only for its speed but also for being the most genial superbike around. What shocked me the most was the supremely comfortable riding position; after the more committed new ’Busa, the old one felt like a 300-kph couch that I’d sat in forever. That set the tone for thousands of people around the world, I suppose. No big bike I’ve ridden so far comes close to the comfort. Heck, it even has a generous pillion seat for brave souls to sink into. 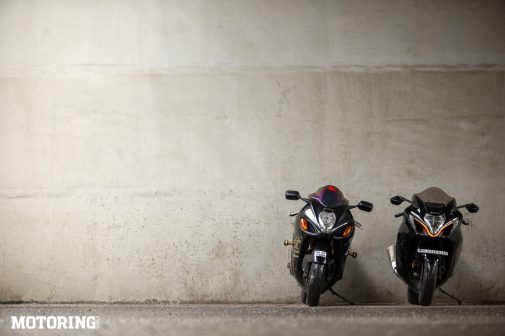 When I finally twisted the old ’Busa’s throttle, a wave of nostalgia-infused horsepower swept me away. Like the big clocks in its cockpit, the old ’Busa felt analogue and wild — technology moves on because it has to, but old-school speed still teaches you a thing or two because everything is up to the rider. The absence of a surfeit of sensors and nannies made the experience purer than any modern superbike I’ve ridden. It felt friendly yet raw, and still more than capable of fulfilling its purpose — which is to be ridden fast and hard, demolishing distances at will. I couldn’t help but think of the hundreds of thousands of wide-eyed smiles the Hayabusa has triggered around the globe. And it was satisfying to note that the new one will continue that fine tradition in the most suitable manner.

What makes the Hayabusa so legendary? Other superbikes have seen upgrades with more or less every calendar I’ve thrown out over the years. The Hayabusa has had three in the time it took me to go from 16 to 38, which makes glaciers look fast. Then again, maybe the Hayabusa is proof that we don’t really like change for the sake of it. This is a motorcycle that is at once a cult in itself and yet is a pop-culture icon. The way it looks is as much a reason for its appeal as the speed it generates. Not to forget that bomb-proof motor which has seen service on drag strips, salt flats, countless scary YouTube videos, and then has enough left over for the brave to bolt on turbos. No other motorcycle in history has seen speed like the Hayabusa has. 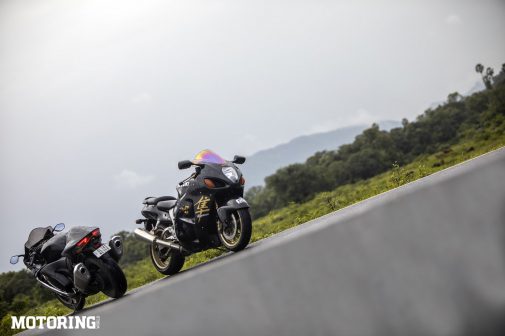 In bringing these two Hayabusas together, I wanted to see if there was a common thread that ran through them — and there are many. For starters, they look like Hayabusas, through and through. Their meters are then-and-now versions of the same design. They’re both planted and send the rider’s confidence into orbit, which makes them as friendly as a pair of well-fed puppies. And they will both show you 300 kph. However, I doubt I’ll ever figure out why the Hayabusa is more than the sum of its parts, and that’s all right. I’m happy with the realisation that it’s a motorcycle that unites us all. From purists to wannabes and everyone in between, we’re all attracted to it. And it’s the way the Hayabusa brings us together that makes it the legend it always will be.